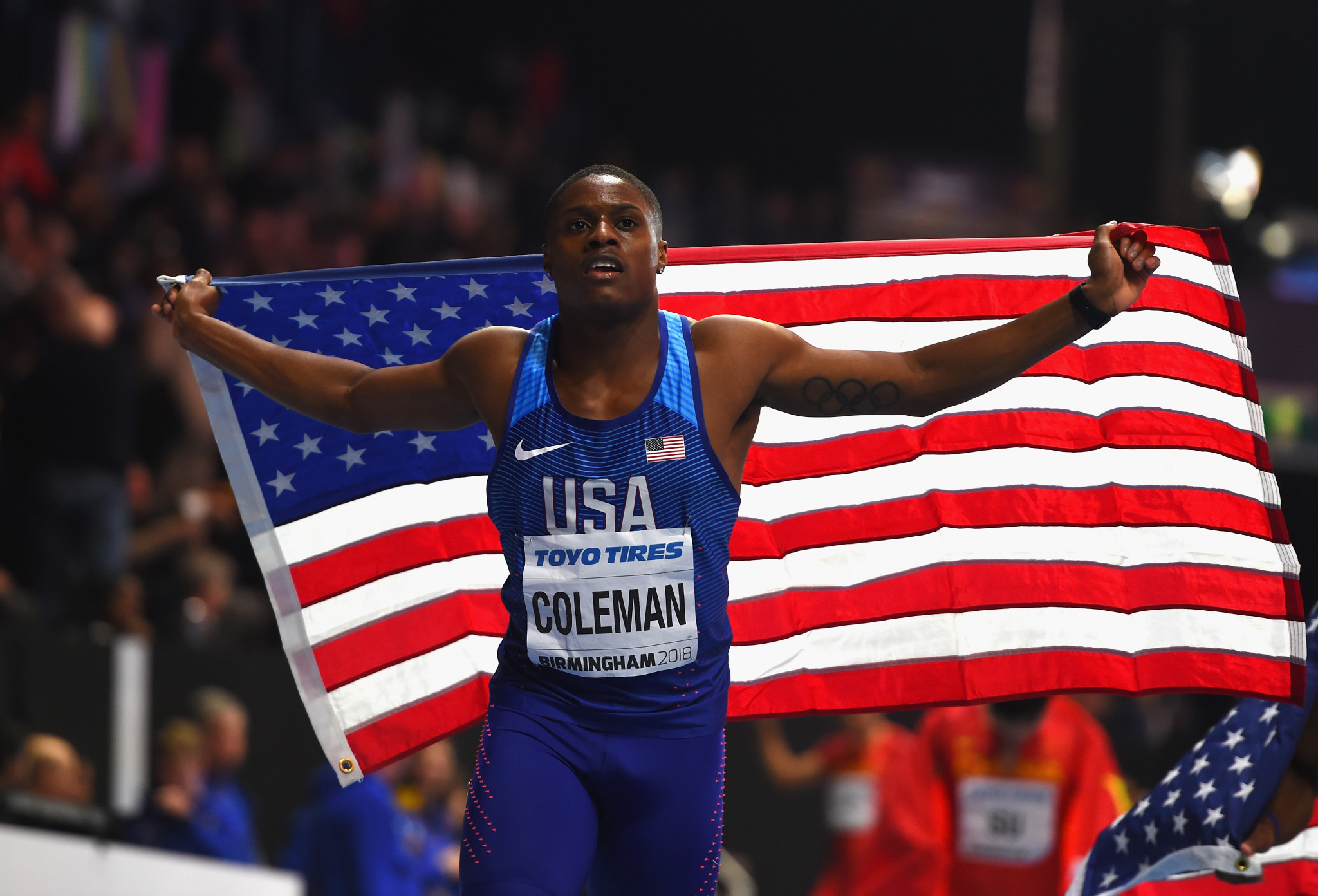 The 22-year-old, who set a world 60m record of 6.34sec earlier this year before winning the world indoor title in Birmingham, missed the US Championships three weeks ago with a minor muscle problem.

Also in the race at the Prince Moulay Abdellah Stadium is the man Lyles beat to the US title, 24-year-old Ronnie Baker, who has also clocked 9.88 this season, and 33-year-old Michael Rodgers, who has run 9.89 this year.

It will be the first time these four have been on the same start line, and the result will offer yet more evidence as to who is most likely to fill the void at the top of world sprinting following the retirement of Jamaica's Usain Bolt last season.

Lyles, the youngest of the quartet who only turns 21 next week, is in flying form, having achieved his second 19.69 clocking of the season over 200m in Lausanne a week ago.

In his first outdoor race of the season, Coleman clocked a wind-assisted 9.84 to finish second to Baker at the IAAF Diamond League meeting in Eugene, and he finished fourth in the Rome Diamond League 100m on May 31 in his season's legal best of 10.06, a race won by Baker in 9.93.

Ideal sprinting conditions are forecast in the Moroccan capital.

The women's 5,000m, which brings together world champion Hellen Obiri of Kenya and Ethiopia's Genzebe Dibaba, will be another highlight.

The pair have met over this distance twice - in Rome last year, when Obiri won in her lifetime best and Dibaba was a distant sixth, and in Eugene this year, when Dibaba won in 14:26.89 with Obiri a well-beaten third, nearly 10 seconds behind.

Agnes Tirop of Kenya and the Ethiopian duo of Senbere Teferi and Letesenbet Gidey may also figure significantly.

Jamaicans Akeem Bloomfield and Nathon Allen ran 43.94 and 44.13 when finishing second and third at the NCAA Championships and it will be interesting to see whether their form has carried over in their first outing over one lap of the track in Europe this summer.

In the men's pole vault, 2012 Olympic champion and world record-holder Renaud Lavillenie of France and USA's Sam Kendricks, the world champion, will renew their rivalry having already met six times this year alone.

But there will be attention too on Timur Morgunov, an Authorised Neutral Athlete having his first competition outside Russia this year and who recently cleared 5.92m.

The women's high jump sees another Authorised Neutral Athlete, Maria Lasitskene, seeking to earn her 46th consecutive win and extend her winning streak which goes back more than two years.

Johannes Vetter, the world champion, has had to withdraw from the javelin owing to a slight injury but his German compatriots Thomas Rohler, the Olympic champion, and Andreas Hoffmann have both thrown beyond 91m this season.

The men's 3,000m steeplechase will, perhaps, draw the biggest interest from domestic fans.

Morocco's world silver medallist Soufiane El Bakkali has talked in recent days about making a bid to go under eight minutes which means that Kenya's world and Olympic champion Conselsus Kipruto may be forced into running much faster than his world-leading 8:08.40 if he is to come out on top.

South Africa's world and Olympic 800m champion Caster Semenya has forsaken running over two laps of the track and instead goes over 1,000m, a non-IAAF Diamond League event, for only the second time in her career.