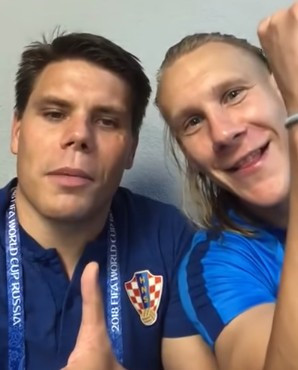 Croatia have found themselves at the centre of a diplomatic row with Russia, forcing them to send home an assistant coach who posted a pro-Ukraine video which has angered the host country.

The Croats removed former international Ognjen Vukojević, 34, from their delegation and also apologised for defender Domagoj Vida, who also contributed to the video which dedicated their quarter-final victory on penalties against Russia in the FIFA World Cup in Sochi on Sunday (July 8).

In the video, Besiktas defender Vida, who used to play for Dynamo Kiev, shouts "Glory to Ukraine!" before assistant coach Vukojević - who also played for Dynamo - added: "This victory is for Dynamo and Ukraine."

Relations between Russia and Ukraine have been strained since the former annexed Crimea shortly after the 2014 Winter Olympic Games in Sochi.

After the incident, FIFA's Disciplinary Committee issued a warning to Vida but did not ban him.

The Croats, though, have decided to punish Vukojević.

There have been anti-Croatian chants heard in Moscow and criticism from Russian politicians about the video which has overshadowed the build-up to Croatia's semi-final against England at the Luzhniki Stadium in Moscow tomorrow.

"The Croatian Football Association has decided to undo Vukojević''s functions at the Croatian National Team where he performed the role of the observer and his team accreditation for the World Cup was withdrawn," the Croatian FA said in a statement.

"The Croatian Football Association apologises this way to the Russian public for the behaviour of a member of the staff of the national team.

"Ognjen Vukojević and Domagoj Vida also apologize for statements that, in their intent, did not have political connotations, but left room for such interpretations."

Vida, 29, who scored in extra-time against Russia and also in the penalty shootout, had earlier attempted to justify the clip.

"Our intention was not to offend anyone," he said.

"Throughout my career, I have had teammates from many countries and I respect them all, and just as I have many friends in Ukraine, I have a number of them in Russia - and I am proud of all of them."

"I am happy to speak the Russian language, I enjoy Russian hospitality at the 2018 FIFA World Cup and I sincerely hope that this message will not be understood as anything else but an expression of gratitude to our friends in Ukraine for their support - not in the match against Russia, but during the entire World Cup."

The Kremlin have avoided escalating the row and detracting further from what has been a hugely successful World Cup.

"The most important [thing] is that it was an honest match and we are talking about football and not politics here," President Vladimir Putin's spokesman Dmitry Peskov said today.