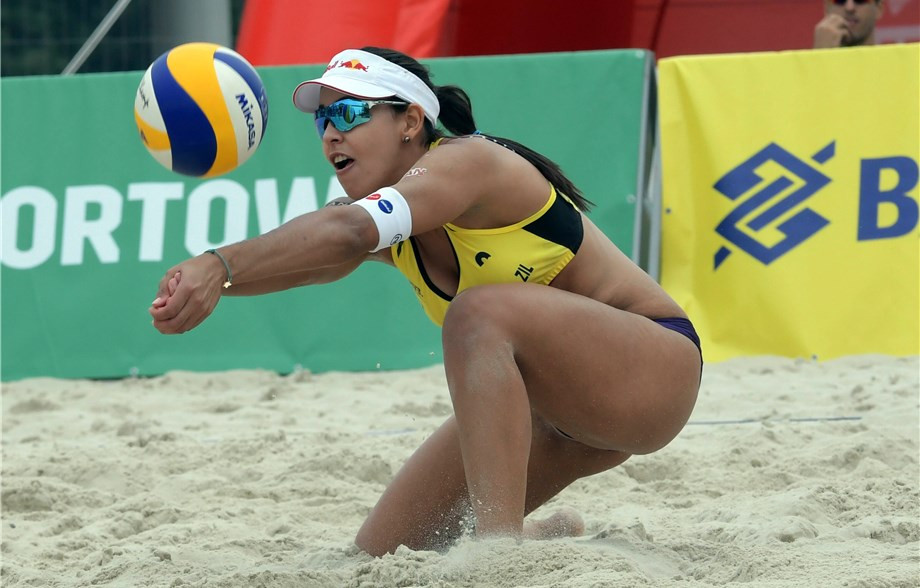 Five pairs from Brazil, two in the men’s draw and three in the women’s, have made it through to the second round of the International Volleyball Federation (FIVB) Beach Volleyball World Tour event in Warsaw after winning both of their pool games today.

In total eight teams have made it through already, though all 64 pairs are still in contention with the do-or-die losers’ matches tomorrow at Monta Beach Volleyball Club in this double-gender FIVB World Tour 4 event.

In Pool C in the women’s draw, third seeded pair Maria Antonelli and Carolina Solberg Salgado were among one of the Brazilian pairs to make it through.

They beat Poland’s Jagoda Gruszczynska and Aleksandra Gromadowska in their first match 21-17, 21-11 before beating Dutch wild-cards of Sanne Keizer and Madelein Meppelink in a tougher game, 10-21, 21-16, 15-10.

Salgado called it a "great day".

"The second one [game] against The Netherlands was a crazy match," she said.

"We started really bad while they were serving really well.

"But these things make us stronger and I am so proud and happy."

In Pool B, another Brazilian pair, second seeds Barbara Seixas De Freitas and Fernanda Alves also made it through with two wins.

In the men’s event Pool E proved the most competitive.

Another Brazilian pair, third seeds Vitor Goncalves Felipe and Evandro Goncalves Oliveira Junior, also won their pool and advanced to the second round.

The game of the day came in an all-Russian tie in the men’s draw between Oleg Stoyanovskiy and Igor Velichko on one side and Viacheslav Krasilnikov and Nikita Liamin on the other.

Tomorrow is due to begin with a Pool C match up in the women’s draw between the home pair of Jagoda Gruszczynska and Aleksandra Gromadowska and Switzerland's Annouk Verge-Depre and Joana Heidrich.

The tournament is due to finish on Sunday (July 1).