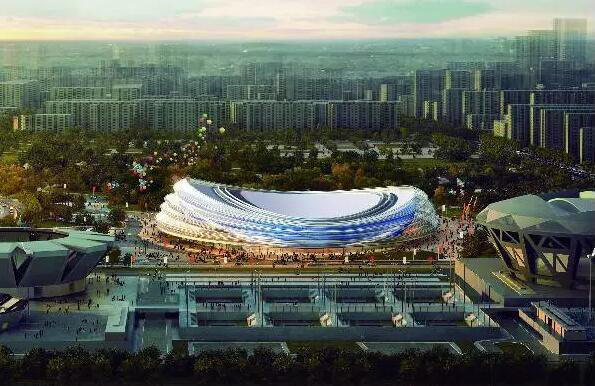 Underground construction has been completed at the 2022 Winter Olympic Games speed skating venue in Beijing as officials promised the arena would have a sustainable legacy for the Chinese capital.

The National Speed Skating Oval, nicknamed the "Ice Ribbon" owing to the pattern included in its design, is expected to be totally finished by 2019.

Building work on the venue, one of two new competition facilities being built in the Chinese capital for the Games, began in April 2017.

"It will be one of our future major tasks to maintain the coexistence between speed skating and other ice sports and the sustainable use for the public," he said.

"In an effort to raise public interest and fulfill our social responsibility, the National Speed Skating Oval will join hands with China Disabled Persons' Federation and other social institutions to provide a platform for more people to take part in skating sports."

Construction work will feature the installation of 22 separate light arcs, or ribbons, running around its exterior.

It is claimed this will symbolise the speed of the sport and the year in which the Winter Olympic Games are taking place in Beijing.

"We are facing a very fortunate situation, with this venue being available two years before the Games, giving the best opportunity to create optimal conditions," ISU vice-president Tron Espeli said.

"It's very encouraging to see coexistence between speed skating and other ice sports and public use in the oval's post-Games utilisation plan."