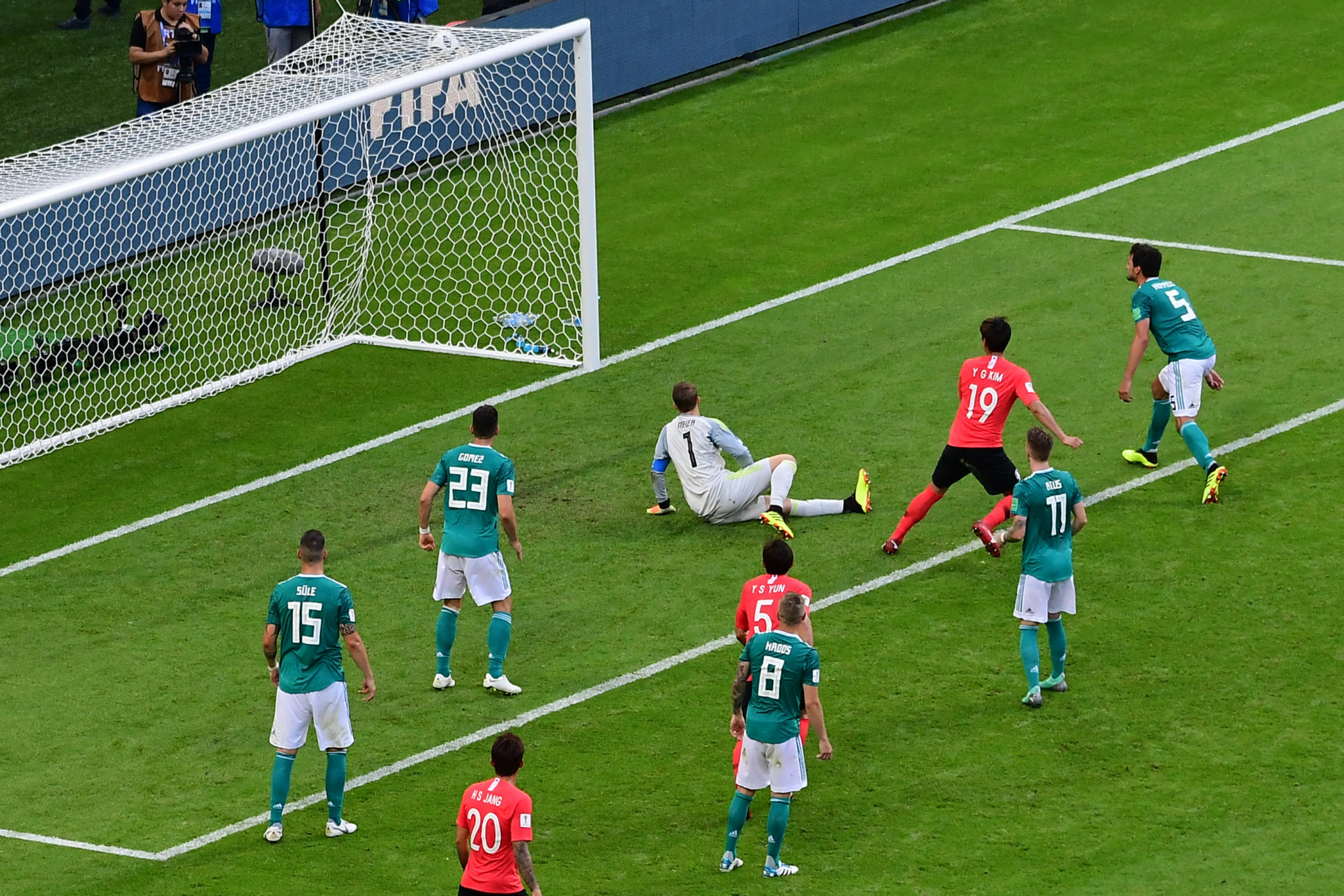 Reigning champions Germany crashed out of the FIFA World Cup today as they lost 2-0 to South Korea to exit after the group stages for the first time ever.

Sweden also beat Mexico 3-0 to top Group F ahead of their beaten opponents, while Brazil and Switzerland progressed from Group E.

Sweden are now due to face Switzerland in the last-16 while Brazil will face Mexico.

Germany missed plenty of chances in sweltering conditions at the Kazan Arena but always looked vulnerable to a South Korean counter-attack.

As time ticked down, it was the Asian side who broke the deadlock.

Kim Young-gwon stabbed the ball into the net from a corner and, while it was initially ruled out for offside, VAR (Video Assistant Referee) intervention showed how the ball had reached him off a German player - Toni Kroos -  so the decision was overturned.

German goalkeeper Manuel Neuer then charged up the pitch in a desperate hunt for an equaliser.

Ju Se-jong gained possession and duly launched the ball forward for Son Heung-min to tap into an empty net.

Germany were eliminated from the 1938 World Cup in the first round after a 4-2 replay loss to Switzerland when it was a straight knockout tournament but no German or West German side had ever failed to navigate beyond the opening stage in 80 years since.

It also marks the fourth time in five edition where the reigning champions have exited in the group stage of the next World Cup after France in 2002, Italy in 2010 and Spain in 2014.

Mexico were at one stage in danger of elimination despite winning their first two game, if Germany had broken the deadlock.

They were outclassed by Sweden in the second half at Yekaterinburg's Central Stadium.

Ludwig Augustinsson shot Sweden ahead five minutes after the break when a Viktor Claesson mis-hit deviated into his path.

Edson Alvarez clumsily turned in an attempted clearance into his own net to make it 3-0.

Brazil avoided avoided a repeat of the Germany shock with a 2-0 win over Serbia at Moscow's Otkritie Arena to top Group E.

Paulinho put the five-time champions ahead after latching on to Philippe Coutinho's throughball in the first half.

Serbia threatened to equalise at the start of the second half before Thiago Silva doubled their lead with an unmarked header from a corner,

Switzerland drew 2-2 with Costa Rica to consolidate second place in the group at the Nizhny Novgorod Stadium.

Blerim Demaili put Switzerland ahead before Kendall Wastan levelled for the Central American side soon after half-time.

Substitute Josip Drmic put the Swiss back in from in the 88th minute.

Unbeaten Belgium and England will meet at Kaliningrad Stadium to decide who finishes top of Group G as already eliminated Tunisia and Panama will meet at the Mordovia Arena in Saransk.

In Group H, Japan will play Poland at the Volgodrad Arena as Senegal face Colombia at the Cosmos Arena in Samara.

Japan, Senegal and Colombia can all still qualify.