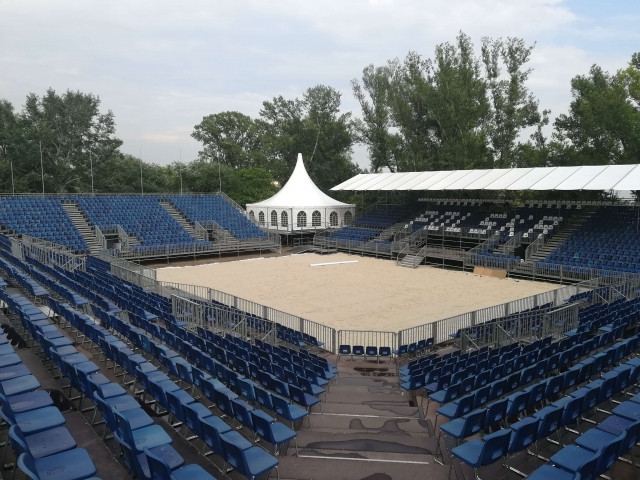 The tournament, due to start tomorrow at the Monta Beach Volleyball Club, is a double-gender FIVB World Tour 4 event.

Previously Warsaw has only hosted women's only competitions, in 2006 and 2007.

Up to 129 pairs from 37 different countries have signed up for the tournament, which will feature a pool system before the knock-out rounds.

A total of 24 seeded pairs will be seeded directly into the main draw, while the remaining eight spots will be decided by qualification matches scheduled to take place tomorrow.

The new Brazilian pairing of reigning Olympic champion Alison Cerutti and reigning world champion Andre Loyola Stein will play in Warsaw, having made their debut as a pair at the Ostrava World Tour event last week, where they finished 17th.

Second in the men's preliminary seedings are the Rio 2016 silver medallists and reigning European champions Paolo Nicolai and Daniele Lupo from Italy.

Warsaw will be the fourth FIVB World Tour event they have entered this season, having taken second place in Fort Lauderdale.

The third seed is taken by another Brazilian pair of Vitor Goncalves Felipe and Evandro Goncalves Oliveira Junior.

Their first and only FIVB World Tour gold came at the Berlin Grand Slam in 2013.

The best Polish team, current FIVB world ranking leaders Piotr Kantor and Bartosz Losiak, could well be given the top seed in the main draw.

"We are very happy that we can play in Poland and we hope that a Polish duo will be on the podium on home soil for the first time since 2011 when Grzegorz Fijalek and Mariusz Prudel claimed silver at Stare Jablonki, because it's time for it," Losiak said.

"We are the leaders of the world ranking, we worked hard for it, but the ranking won't give us the desired result.

"We need to show our strength and good game on the court."

They have won two gold, two silver and a bronze medal on the FIVB World Tour since teaming up at the end of the 2016 season.

The German pair of Chantal Laboureur and Julia Sude are seeded second for the preliminary round.

They will be hoping for their third FIVB World Tour gold or a ninth spot on the podium.

They have won three gold medals since pairing up last year.

The quarter-finals and semi-finals are due to be played on Saturday (June 27), with the medal matches set to take place on Sunday (June 28).