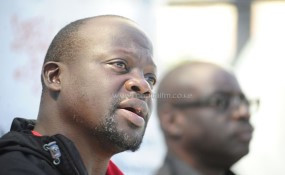 Innocent Simiyu, who recently led Kenya to their highest ever HSBC World Rugby Sevens Series points tally, has been reinstated as the country's head coach just days after a sponsorship controversy saw him sacked.

The Kenya Rugby Union (KRU) announced they had parted ways with Simiyu last Friday (June 22) after he took responsibility for a decision by the players to conceal the branding of their shirt sponsor, during the Paris leg of the World Rugby Sevens Series.

The decision to get rid of 35-year-old Simiyu, who held the job since October 2016 after replacing Benjamin Ayimba, was immediately condemned by both players and fans alike.

The players quickly accused the KRU both of jeopardising their World Cup preparations and of misusing funds, claiming the Union has taken money that is due to them in salaries.

Simiyu, a former captain of Kenya's team, is now back in the job with the Rugby World Cup Sevens due to take place in San Francisco from July 20 to 22.

He is arguably the most successful coach of the Kenyan national side, having recently led them to their highest World Series points tally, finishing the 2017-2018 series on 104.

Shocking @OfficialKRU @richard_omwela! Namcos is highly respected in the Rugby fraternity. And you expect to name a RWC team? In protest, expext a severely depleted squad and subsequent poor showing. Possible 1st round knock out. Shocking! @NguyoReuben @CarolRadull @RobertAlai https://t.co/WF0YSvDap0

It was the first time Kenya have ever surpassed the 100 mark.

Simiyu's reinstatement was announced by the Ministry of Sports, Culture and Heritage Cabinet Secretary Rashid E. Mohamed, who promised they would now work with the KRU to ensure the players salaries are paid.

It was also announced that the KRU would not sack the head coach in future without first consulting the Ministry on their decision.

Kenya begin their World Cup campaign in the first match of the competition next month when they play Tonga on July 20.

They finished fourth in the last World Cup in Moscow in 2013 having lost to England in the semi-finals.

At Rio 2016, where rugby sevens made its Olympic debut, Kenya finished bottom of their group and failed to progress.