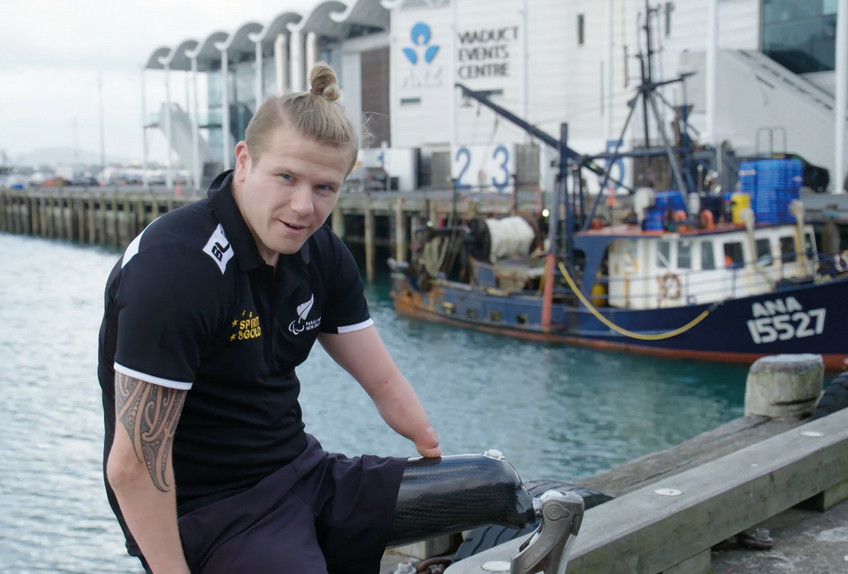 Leslie, who won golds at all of the 2008, 2012 and 2016 Paralympic Games, is also a farmer, so he said he could "understand" the risks faced by Sanford employees every day.

"Health and safety campaigns can be quite dull, so I wanted to help Sanford create something that was surprising, entertaining and that captured attention," he said.

"I really enjoyed working closely with Sanford as we threw around ideas for the creation of the video.

"They realised straight away that a campaign like this can not only help their workers be safe, but also challenge community perceptions and show disability in a really positive way."

Leslie worked alongside the company to create a short film showcasing the risks fishermen regularly face.

It begins with Cameron waking up early to tend to his family farm.

He explains his disability via voiceover and the adaptations he has made to be successful in life.

The film switches to the Sanford factory, with Cameron meeting workers and seeing first-hand the risks they face, from sharp knives to wet floors.

A switch to the boats then follows, looking at the challenges around nets, hooks and, of course, water.

Leslie finishes the video by saying: "If I had your arms and legs, I'd be trying to hold on to them".

Leslie and Sanford were paired together by Paralympics New Zealand thanks to an ongoing partnership between the two.

"The Sanford people behind this film are all able-bodied and we realised early on that we had all sorts of unconscious ideas about how a disabled person should be presented," said Sanford chief executive Volker Kuntzsch.

He said creating the film alongside Leslie has helped them all to think differently about disability.

"I was excited to see the reaction from the Sanford team when we released the film," he added.

"Not only did they pay very close attention to the health and safety messages being delivered, they all love Cameron."

Chief executive of Paralympics New Zealand Fiona Allan said she was "proud" to see the positive reaction the film had.

As well as winning medals in the pool, Leslie is also a senior member of the Wheel Blacks wheelchair rugby team.

He also coaches a number of junior Para-athletes in his spare time.