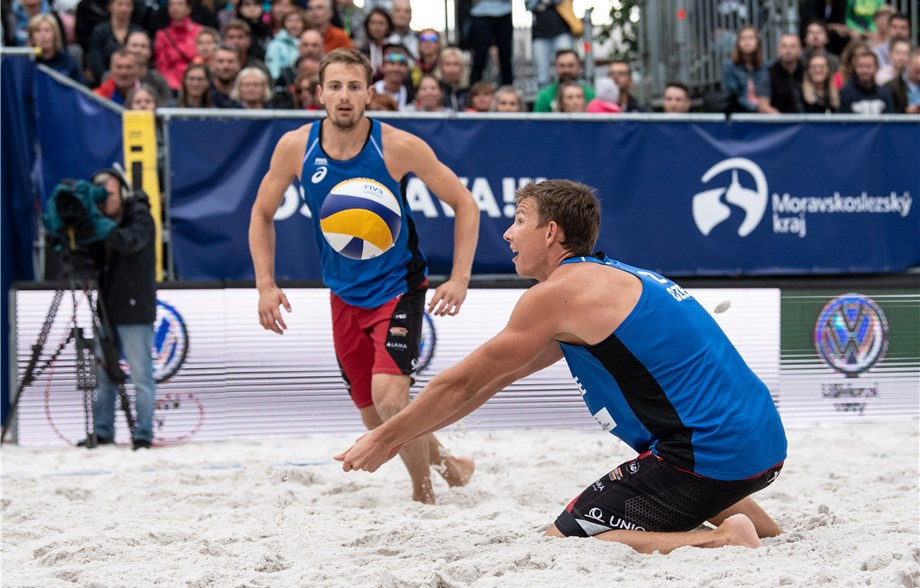 Home Czech fans in Ostrava will have interest in both the men’s and women’s semi-finals tomorrow at the International Volleyball Federation's Beach World Tour event.

Ondrej Perusic and David Schweiner will face fifth seeds Piotr Kantor and Bartosz Losiak of Poland for a place in the men’s final, and Barbora Hermannova and Marketa Slukova meet Victoria Bieneck and Isabel Schneider of Germany in the women’s semi-finals.

A second German pair, Karla Borger and Margareta Kozuch, will feature in the other women’s semi-final against Heather Bansley and Brandie Wilkerson of Canada.

In the other men’s semi-final, Pablo Herrera and Adrian Gavira of Spain face Konstantin Semenov and Ilya Leshukov of Russia.

Perusic and Schweiner earned their place in the last four with a 22-20, 21-15 win over Brazil’s Evandro Oliveira - who won the world title last year with Andre Stein - and his new partner Vitor Felipe.

Their Polish opponents defeated the German pairing of Julius Thole and Clemens Wickler at the same stage, 21-19, 21-13.

Herrera and Gavira 🇪🇸 with a 20-18 win in the tie-breaker! Way to beat Brouwer and Meeuwsen 🇳🇱 and qualify for the semis!#OstravaBeachOpen #BeachWorldTour #beachvolleyball @RFEVB pic.twitter.com/guFKCaj3y1

The Russian pairing advanced thanks to a 21-18, 21-17 win over Michal Bryl and Grzegorz Fijalek of Poland.

Hermannova and Slukova progressed to the last four thanks to a 21-17, 21-15 win over Julia Sude and Chantal Laboureur of Germany.

Borger and Kozuch reached the semi-finals with a 21-14, 21-19 win over Maria Antonelli and Carolina Solberg Santano of Brazil.

Their compatriots also earned a final four place with victory against Brazilian opponents - Bieneck and Schneider secured a 15-21, 21-16, 15-13 win over Agatha Bednarczuk and Eduarda Santos Lisboa.

Bansley and Wilkerson won their quarter-final 15-21, 21-11, 15-12 against Marleen Ramond Van Iersel and Joy Stubbe of The Netherlands.