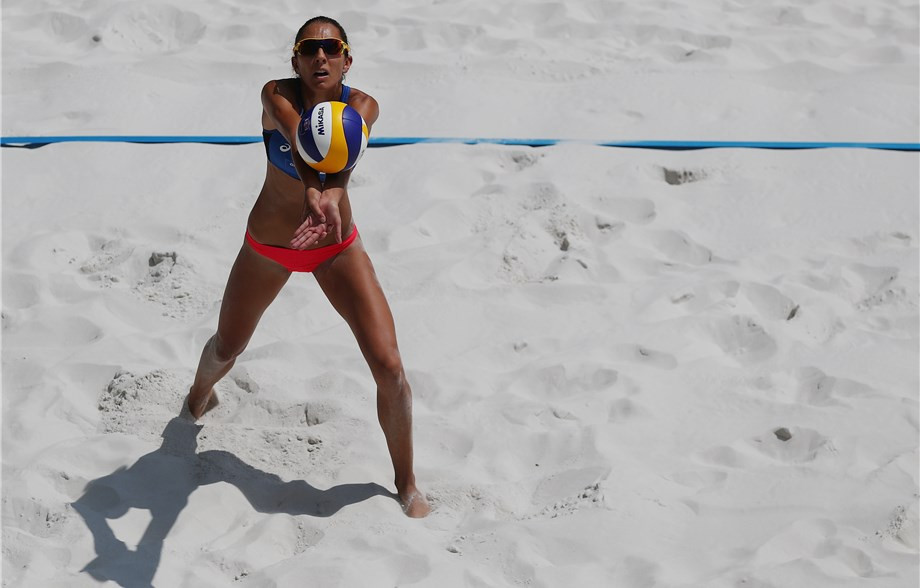 One of the most popular faces in snow volleyball, the Czech Republic's Michaela Knoblochová, has lost on her international beach volleyball debut at the Federation of International Volleyball (FIVB) World Tour event in Ostrava.

Knoblochová won the snow volleyball European Tour last year alongside her partner Anna Dostálová, but had never before appeared in an international beach volleyball event.

"Two months ago I got an offer from Karolina [Řeháčková] to play with her," she said.

"It was amazing because I was already thinking of quitting professional beach volleyball and playing only for fun, but this opportunity gave me new motivation to train more and to set higher goals,"

Unfortunately for Knoblochová her debut at Dolní Vítkovice, a former coal mine which is now Bratislava's cultural hub, ended in defeat in this FIVB World Tour 4 star event after her and Řeháčková lost to the Swiss team of Laura Caluori and Dunja Gerson 11-21, 15-21, in the first round of qualifying.

Knoblochová largely put the result down to a lack of practice.

"Unfortunately, this is only a recent development and I do not have sponsors yet, so I could not afford to travel with Karolina for the recent tournaments in Asia," she said.

"She came back only two days ago, we did not have enough time to practice together and get used to each other before the event in Ostrava, and you could see it on the court."

The game of the day came from the men's qualifying as another Czech pair of David Kufa and Jakub Gala lost out to the Americans John Mayer and Trevor Crabb.

They got off to a good start, winning a very tight first set 27-25.

The tide of the match turned after that however, with Crabb and Mayer winning the final two sets relatively comfortably 21-16 and then 15-10 respectively.

The best match in the women's event saw the Spanish pair of Amaranta Fernandez Navarro and Angela Lobato Herrero line up against the Makhno twins for Ukraine, Iryana and Inna.

As was the case in the men's match, the side that eventually lost the tie, won the first set, as the Makhno twins took it 21-18.

The Spaniards rallied though and managed to snatch an even closer second set 25-23, before also taking the decider 15-11.

It seems their tense first round match did not work in their favour, however, as they then lost their second round game in straight sets against the American pair of Kelley Larsen and Emily Stockman.

The main event on both the men's and women's sides is due to start tomorrow, with the women's number one seeds on first.