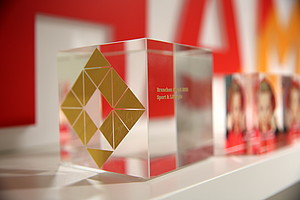 The German Olympic Sports Confederation (DOSB) has received an online award for their digital communications at Pyeongchang 2018.

The "Pyeongchamps" Team Germany coverage of the Winter Olympic Games received the German Gold Online Gold Award in the Sports and Lifestyle category.

It was ruled by the jury that the DOSB, together with its marketing agency Deutsche Sport Marketing and its creative agency Jung von Matt/sports, managed to "transfer the athletes‘ success into digital storytelling".

"With 94 million social media contacts during Games time we brought Team Germany close to the fan base in our country," said DOSB chief executive Veronika Rücker.

"We launched the ‘Heroes de Janeiro’ in 2016, succeeded with 'PyeongChamps' and will carry on linking Olympic sports and digital enthusiasm."

Their coverage was also shortlisted for the top five campaigns of the year along with McDonalds, the Berliner Verkehrsbetriebe and Adidas and eBay.

Germany won 14 gold, 10 silver and seven bronze medals at the South Korean Games to lie second on the medals table.

This included three victories apiece in the sports of biathlon, bobsleigh, luge and Nordic combined, as well as one each in figure skating and ski jumping.

The men's ice hockey team also took a surprise silver medal before losing 4-3 in overtime to the Olympic Athletes from Russia in the final.