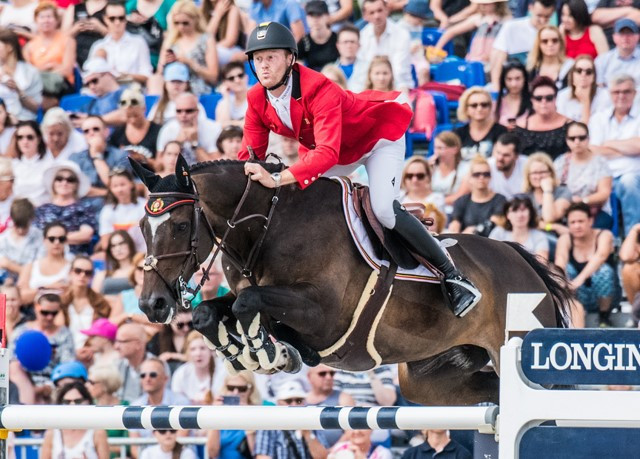 Belgium moved up to second place in the International Equestrian Federation Jumping Nations Cup Europe Division 1 standings after claiming victory at the latest leg in Sopot in Poland today.

Taking the early lead, Peter Weinberg’s side held on to reign supreme ahead of France and the United States at the Hipodrom Sopot.

Foot-perfect runs from Olivier Philippaerts and Jerome Guery, riding H&M Ikker and Garfield de Tiji des Templiers respectively, meant that the four faults collected by Pieter Devos and Claire Z was the Belgian drop-score first time out and anchorman Niels Bruynseels' single time penalty was all they would carry into round two.

Philippaerts double faulted second time out, but Devos was clear and by the time Guery came home with just four on the board it was all over.

France came second with 16 faults, while the US ranked third with 21.

"The course was tough - big and technical - and the time was quite tight," Bruynseels, who rode Cas de Liberte, said.

"But we came here well prepared, with a strong team, strong riders and a good tactic, and everyone did a super job."

Could things be any closer in the @LonginesEq #FEINationsCup standings!?😱😱😱

Let the battle continue as we head to Rotterdam for the next leg 👊 pic.twitter.com/bzTQ56Pe93

Olivier Robert helped France secure second spot with the only double clear of the entire competition from his 14-year-old gelding Eros.

Belgium now have 260 points in the Europe Division 1 standings, putting them 10 behind leaders Switzerland.

France are third with 240 points.

Sweden and Poland were tied for fourth place today with 24 faults, followed by Spain with 27, Italy with 29 and Germany with 32.

Seven Division 1 teams will qualify for the FEI Jumping Nations Cup Final, which is scheduled to take place in Barcelona from October 4 to 7.

Rotterdam is set to host the fifth round of the eight-leg Western European series next Sunday (June 24).