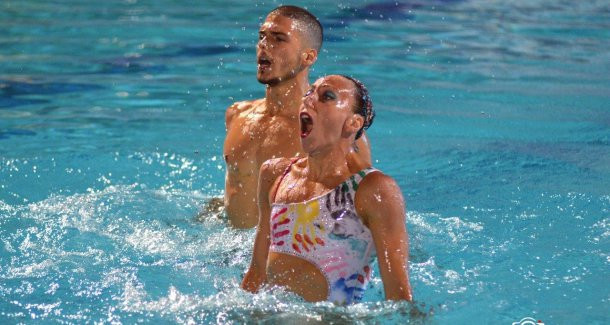 Taking the silver medal were Japan’s Atsushi Abe and Yumi Adachi, concluding with 86.5930 points, while Spain’s Berta Ferreras and Pau Ribes claimed the bronze with 81.4541.

Mexico earned the gold medal in the team free routine with 87.3667 points, adding to their success in the team technical routine yesterday.

Mexico were also the strongest nation in the solo free routine as Nuria Diosdado Garcia triumphed with 84.6333 points.

"We are very happy to be here in beautiful Syros and we are having these important duels against France and Greece, with which we always have strong competition," Diosdado Garcia said.

The show was stolen, however, by legendary American Bill May, who chose to compete in the solo free routine with the colours of his club, Santa Clara, and was unofficially first with 89.2000 points.

"Everything is perfect," the 39-year-old said.

"I am very happy with the way the public welcomed me, but also with the beauty of Syros and Greece in general."

France were the most impressive performers in the highlight routine event, which had opened the second day of competition.

Action on Syros Island, which is hosting the ninth leg of the FINA Artistic Swimming World Series, is due to conclude tomorrow.