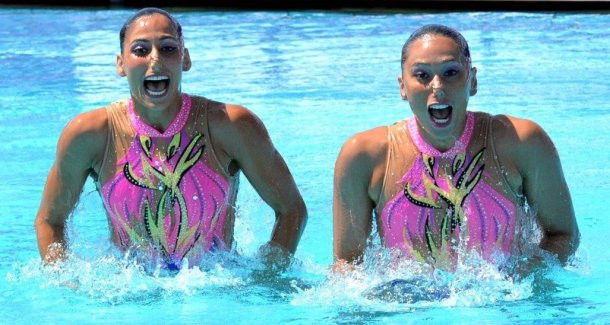 In the first event of the programme, the technical duet, Karem Achach and Nuria Diosdado Garcia performed a beautiful routine and came out on top with 83.6027 points.

The silver medal went to France with twins Charlotte and Laura Tremble receiving 81.9575 points from the judges at the Syros Swimming Pool.

The bronze medal was earned by home favourites Anna Maria Taxopoulou and Georgia Vasilopoulou, members of the Greek national junior team and who are due to represent their country in the World Championships of the category.

Another French pair, Maureen Jenkins and Eve Planeix, had scored better than Taxopoulou and Vasilopoulou and were third in the rankings with 81.6529 points.

But according to the regulations, only one duet per country can count into the official standings.

Mexico’s Joana Jimenez Garcia won her first gold medal of the FINA World Series in the second event of the day, the technical solo, with 82.9070 points.

"I’m very happy for this gold," the 25-year-old Garcia said.

"Our preparation is focused on the Central American Games, to be held in Colombia.

"Our training is very hard - we are swimming a lot of hours, about nine to 10 hours a day."

Taxopoulou climbed on the third step of the podium with 79.0282 points.

Mexico also grabbed the gold medal in the technical team event with 83.9287 points.

Action on Syros Island, which is hosting the ninth leg of the FINA Artistic Swimming World Series, is due to continue tomorrow.