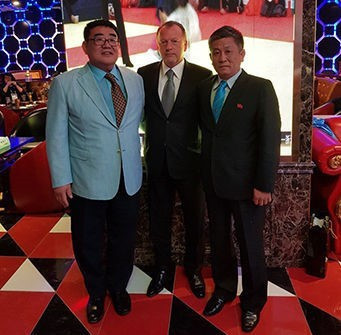 South Korea and North Korea will form a joint judo team for this weekend's East Asian Championships in the latest example of sport uniting the two nations.

The neighbouring countries are still technically at war but have combined on the field of play in recent weeks in an apparent thawing of tensions.

They will now compete as a unified team at the East Asian Championships in Mongolia's capital Ulaanbaatar, on June 9 and 10.

The discussions, held at the IJF Grand Prix in Hohhot in China last month, also raised the possibility of a joint team at the IJF World Championships in Baku in September.

Talks on this possibility are said to be "on track".

More than 200 judoka will compete in Ulaanbaatar in all with Korea taking part alongside the host nation, China, Japan, Chinese Taipei and Hong Kong.

The unified Korean flag will be used and Arirang, a Korean folk song, will be played as the united team's anthem.

Both of these were used when the Koreas came together at the Pyeongchang 2018 Winter Olympics held in the South in February.

The countries joined forces to march together at the Opening Ceremony after the International Olympic Committee (IOC) hosted four-party talks in Lausanne on January 20.

A total of 22 athletes from North Korea competed at the Games and a joint women's ice hockey team was formed.

Further moves saw a squad of cheerleaders deployed and, arguably most significantly of all, a high-level North Korean delegation travelled which included Kim Yo-jong - the sister of the leader.

Kim, however, made a surprise New Year's Day announcement that his country would be prepared to compete at the Games.

The two leaders have since agreed to meet at a Summit in Singapore amid an uneasy hope for denuclearisation of the Korean peninsula.

Women's teams from both countries were due to play each other in the quarter-finals but they instead combined and went straight through to the last four.

Joint teams are also being discussed for this year's Asian Games in Jakarta and Palembang.