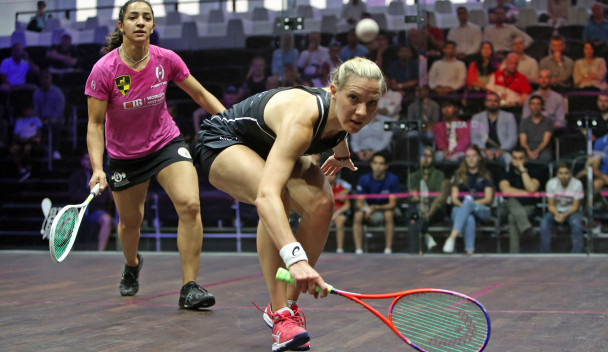 England's Laura Massaro began the defence of her women's Professional Squash Association World Series Finals title with a win as she came from behind to beat Egypt's Raneem El Welily in Dubai.

Massaro, seeking a third straight World Series Finals crown, recovered from losing the opening game to clinch an 8-11, 11-9, 11-8 victory on the opening day of the tournament at the Emirates Golf Club.

The former world champion and three-time Commonwealth Games silver medallist has now won five of her last six matches against the world number two after triumphing in the Group B clash.

"It was such a tight match and I thought I needed to nick a game," said Massaro.

"Even if I lost the next one at least nicking a game would put one on the board.

"I didn’t think I would win it last year to be honest, everyone keeps saying ‘how do you feel about three times?’ and I can’t believe I won it twice.

"It really is one match at a time and as Mohamed Elshorbagy said yesterday, every match that you play can be like a World Series final and you prepare as if it is a final.

“It’s nice to know you’re coming back for three days in a row regardless of results.”

Germany's Simon Rösner secured an impressive win in Group B of the men's event as he ousted former world number one Karim Abdel Gawad of Egypt.

Rösner needed less than half an hour to record a 12-10, 11-6 success against the Egyptian, who appeared to be struggling with a shoulder injury.