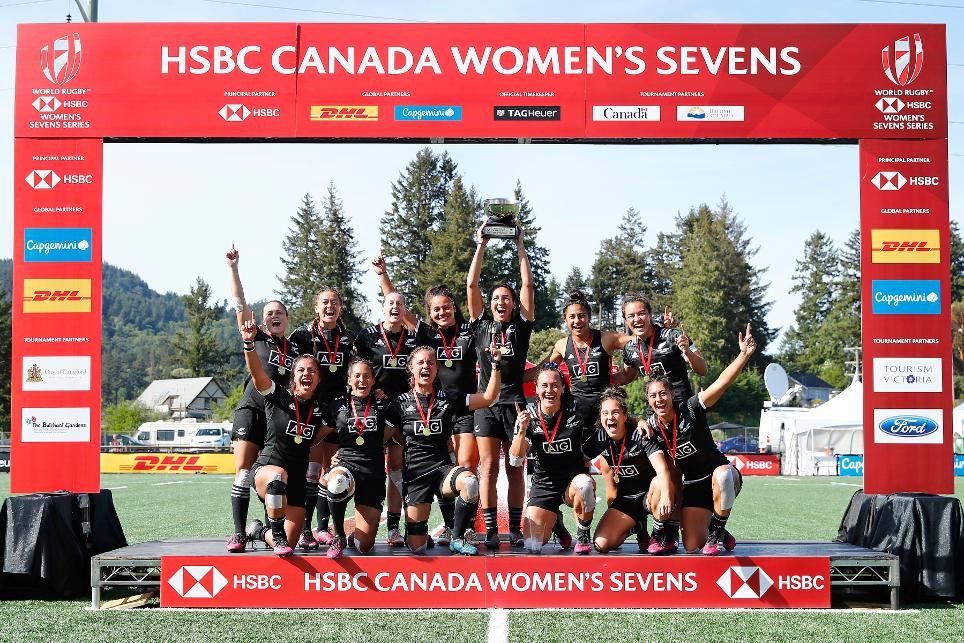 New Zealand beat Australia 46-0 in the final of the World Rugby Women's Sevens Series event in Langford in Canada, moving them to within four points of their opponents at the top of the overall standings with one round remaining.

It was the 13th time the most dominant teams in series history had met in a Cup final and it was a complete reverse of their last encounter in January.

Australia ran out 31-0 winners that day in Sydney, marking the first time New Zealand had failed to score a single point in a match.

This time it was New Zealand's turn to shut-out their rivals and record their highest score against Australia by a considerable margin.

Player of the final Portia Woodman opened the scoring at Westhills Stadium after some good work by Ruby Tui, who then found herself in space out wide for a try after some nice running lines by her team-mates.

A third try swiftly followed when Tui slipped one tackle then earned a penalty for a high tackle.

Kelly Brazier reacted quickly, taking the tap and giving series leaders Australia no chance to stop her from close range.

It got worse for Australia on the stroke of half-time when Woodman hurdled an attempted tap-tackle and raced down the touchline to make it 22-0.

There was no respite for Australia in the second-half as New Zealand picked up where they left off with two tries for Niall Williams, the second from a switch pass from Brazier, before captain Sarah Goss barged through Georgina Friedrichs to increase their tally to seven.

Australia were then caught cold on their own line, not retaining the ball after a tackle from Brazier who quickly jumped to her feet, spotted the ball was out and nipped in to pick it up and ground the ball for the eighth and final try.

Highlights: Take a look at all the action from day two at the #Canada7s as the @BlackFerns claimed their second tournament win of the 2018 series pic.twitter.com/9oOdURCwiY

"Really proud of the girls, we put in a lot of effort," Goss said.

"We've been on the road for a long time so we are really stoked with the result and happy to be heading back for some recovery.

"Credit to Australia as they are an amazing team.

"We love playing them and it just shows how amazing women’s rugby is at the moment."

New Zealand had earlier beaten England 17-12 in the quarter-finals and the United States 33-10 in the semi-finals.

Australia’s route to the final saw them defeat Fiji 21-5 in the last eight and France 17-12 in the penultimate round.

New Zealand's victory caps off a remarkable month that has also seen them win gold medals at the Gold Coast 2018 Commonwealth Games and the Women's Sevens Series event in Japanese city Kitakyushu.

They now have 70 points in the overall standings, sitting in second place behind Australia who have 74.

Here's how the HSBC World Rugby Sevens Series table is shaping up with just one tournament to go for the womens teams #Canada7s #HSBC7s pic.twitter.com/OBKE0LfmZ9

France, who suffered a 21-5 defeat to the US in today’s bronze medal match, are third with 54 points.

The US and Canada, who secured fifth spot at their home event with a 29-12 win over Ireland, both have 44 points.

Russia, the 12th-place finishers in Langford after losing 24-19 to Brazil, are sixth with 43 points.

Victory for Japan means they finish a series event with an impressive three wins to their name.

The 2018 Women's Sevens Series is due to conclude in French capital Paris next month with the final round scheduled to take place from June 8 to 10.

Wales will join the 11 core teams as the invitational side.