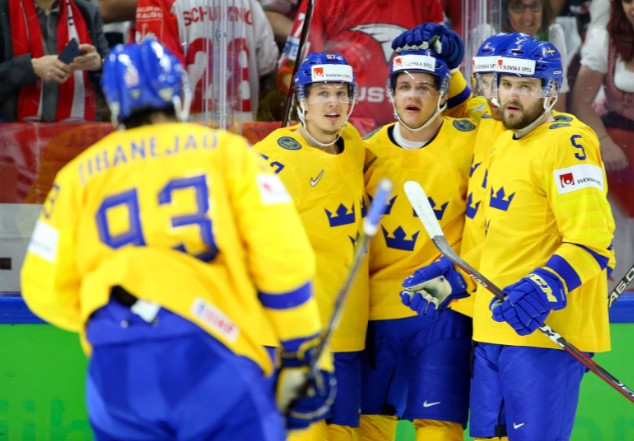 Defending champions Sweden swept aside Austria by a convincing 7-0 scoreline to reach the summit of Group A on day six of the International Ice Hockey Federation (IIHF) World Championship in Denmark.

The Swedes started brightly at the Royal Arena in Copenhagen and took the lead through Adrian Kempe's goal in the ninth minute, before they ended the first period 2-0 up thanks to a goal from Mattias Janmark.

They then continued this dominance in the second period with two goals from Rickard Rakell and one from Gustav Nyquist giving them a comfortable 5-0 lead in the 29th minute.

This led to the Austrians calling a time out to try and pull themselves back together.

The time out, however, failed to work and Sweden scored two more goals through Mika Zibanejad and Magnus Paajarvi in the final period, giving them a 7-0 win overall which puts them top of Group A ahead of Olympic champions Russia.

The other Group A match saw Switzerland keep their unbeaten run going with a 5-2 win over Belarus, who are rooted to the bottom of the table.

Frederik Andersen @f_andersen30 leads Team Denmark @DKIshockey in a salute around the ice on the biggest night of their 2018 #IIHFWorlds tournament. pic.twitter.com/OdKg2IhYMT

In Group B, hosts Denmark shocked group leaders Finland by beating them 3-2 at the Jyske Bank Boxen in Herning.

The two teams were evenly matched in the first period with no goals scored, the first time this has happened at this tournament.

Twenty-five minutes into the third and final period, Mikael Granlund gave Denmark a two-goal cushion and the points looked safe.

Nichlas Hardt got a goal back for Finland with just two minutes to go but the Danes held out to record a surprise 3-2 victory.

In today's other Group B match, Olympic silver medallists Germany gave their survival hopes a dramatic boost with a 6-1 thrashing of South Korea, who are three points adrift of safety.