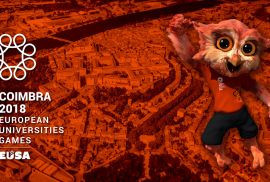 An owl called DUC has been unveiled as the official mascot of this year’s European Universities Games in Coimbra.

The owl was created by the University of Coimbra's Image, Media and Communication Project.

It is billed as the interpretation of a symbol of the Greek mythology that is present on University of Coimbra insignia: "The Owl of Minerva".

This is said to represent "knowledge, wisdom, perspicacity and erudition".

It can be seen on the University Tower when seen from University Stadium of Coimbra.

The mascot was created after analysing several proposals from local kindergarten students.

The name "DUC" is an acronym of "Desporto Universitário em Coimbra", the name of the University in Portuguese.

The mascot was first showcased in Aveiro during the final phase of the National Universities Championships.

More than 4,000 participants are due to compete in 13 sports at the European Universities Games.

It is due to take place between July 15 and 28 this year.