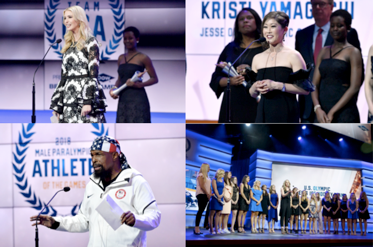 The United States Olympic Committee (USOC) has announced the 2018 winners for the Team USA Awards Best of the Games with American President Donald Trump’s daughter Ivanka among those in attendance at the Duke Ellington School of the Arts in Washington D.C.

The Awards recognise the US’s “outstanding performances and awe-inspiring achievements” from the Pyeongchang 2018 Winter Olympic and Paralympic Games across eight categories.

In her first Olympic Games, Kim nailed a 98.25-point victory lap run in halfpipe after posting a 93.75 on her first run to secure the gold medal.

She is the youngest woman from any nation to win a gold medal in snowboarding.

With an impressive 97.75-point final run to triumph, White became the first snowboarder to ever win three Olympic gold medals and is the first American man to win gold medals at three Winter Olympics.

He now owns the second most gold medals among US men in Winter Olympics history.

For the first time since 1998, the US defeated rivals Canada for the Olympic gold medal in women’s ice hockey.

The US women beat the four-time Olympic champions, 3-2, in a shootout after tying the game with less than seven minutes remaining in regulation time.

Nordic skiers Oksana Masters and Dan Cnossen were named the male and female Paralympic athlete of the Games respectively.

After fracturing her right elbow three weeks prior to the Winter Paralympics, Masters overcame unsurmountable odds to win five medals - two golds, two silvers and one bronze - in biathlon and cross-country competition.

She left Pyeongchang as the most decorated athlete on the team and in the history of the Para-Nordic skiing programme.

In his second Paralympic Games, Cnossen medaled in each of the six cross-country and biathlon events he entered, winning one gold, four silvers and one bronze.

He also made history as the first American man to win biathlon gold at the Winter Olympics or Paralympics.

Winning the Paralympic team of the Games prize was the sled hockey team.

Powered by the late shooting heroics of Declan Farmer, the US claimed an unprecedented third consecutive gold medal at the Winter Paralympics with a thrilling 2-1 overtime victory over Canada.

The six athlete and team award winners were determined by online fan voting on the Team USA website, where nearly 600,000 fan votes determined 50 per cent of the final tally.

As a coach for the US national cross-country ski team and the personal coach of two-time Olympian Jessie Diggins, Cork was instrumental in leading America to its first-ever Olympic medal in women’s cross-country skiing and the first US gold medal in the sport.

In addition to the historic victory in team sprint, Cork also guided Diggins to three individual top-five finishes - the best-ever for an American woman in Olympic cross-country skiing prior to the gold medal.

Prior to the Games, the US had only garnered one biathlon medal in Winter Olympics or Paralympics history.

Colliander also coached the team to nine medals in cross-country races, bringing its event total to 16 medals, including six golds.

For coaching awards, national governing bodies selected their nominees and the winners were determined via a selection committee.

The year-end celebration also saw Olympic figure skating champion Kristi Yamaguchi receive the third annual Jesse Owens Olympic Spirit Award, which recognises an individual who has served as a powerful force for good in society, inspiring others by contributing to a better world, uniting people or leading a cause.

Tom Kelly, vice-president of communications at US Ski and Snowboard, was confirmed as the recipient of the Building Dreams Award, which honours an individual, group or community that has gone above and beyond in its support of the American team.

In addition to Dow, the presenting sponsor, the Team USA Awards are supported by DICK’S Sporting Goods and USG.

The awards show, which featured NBC sportscaster Mike Tirico as host, will be televised as a 90-minute feature for the first time ever.