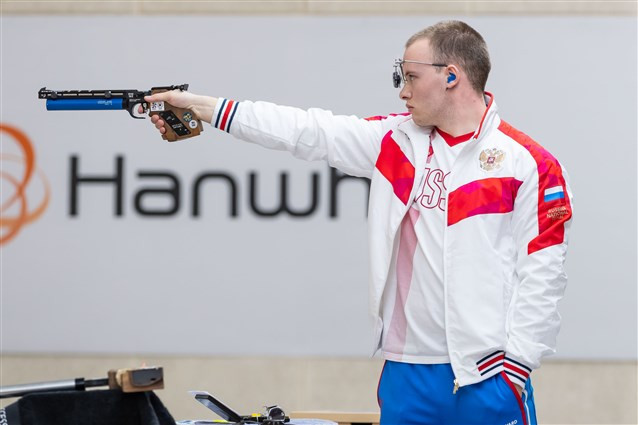 The 22-year-old started well and moved into the lead after the first ten shots thanks to a points total of 110.6.

He then built on this momentum and was eventually 4.1 points in front of the competition after 18 shots at a shooting range due to host the 52nd ISSF World Championship in September.

The match, however, suddenly turned on its head as Chernousov shot badly, meaning his lead over India's Shahzar Rizvi was cut to just 0.2 points.

The Russian recovered, though, to shoot for a score of 10.0 with his final shot - a score world record holder Rizvi failed to match- meaning.

It meant Chernousov clinched his first-ever ISSF World Cup medal by just 0.2 points with a total score of 240.0.

Bulgaria's Samuil Donkov claimed the bronze, the first ISSF World Cup medal of his career, with a total score of 217.1 point.

The men's trap event was won by Italy's Mauro De Filippis thanks to a score of 45.

This was enough to see off competition from Jiri Liptak of the Czech Republic and Yavuz Ilnam of Turkey, who scored 42 and 34 respectively.

After securing his first ISSF World Cup gold medal in eight years, De Filippis said: "It hasn’t been easy at all.

"My rivals, they were all great shooters, and we all had to face some tough weather conditions, both yesterday with the heavy rain, and today, when the wind was affecting the targets a lot.

The event is due to continue tomorrow with competitions taking place in the men's 50m rifle 3 positions, the women's 10m air pistol, the trap mixed team and the men's 25m rapid fire pistol.