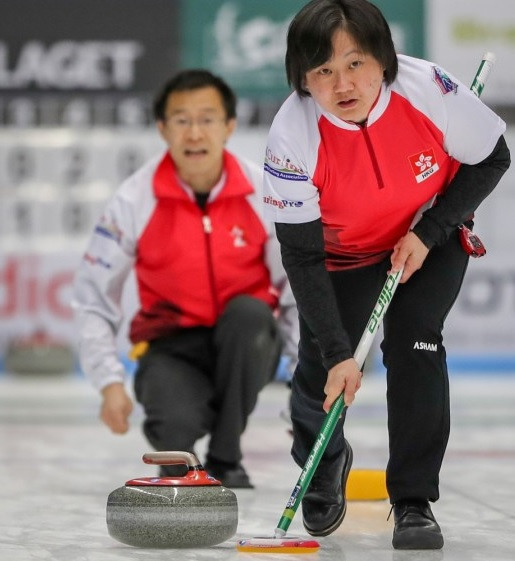 Hong Kong secured their first victories at the World Mixed Doubles Curling Championship with wins over Slovakia and Israel in Östersund.

The Hong Kong team started brightly in their first match of the day against Slovakia at the Östersund Arena and took the first end 3-0.

From that point on, they never fell behind and eventually emerged triumphant by an 8-5 scoreline in the Group D encounter.

“It’s always nice to get the first one and we played a really good game today.

“[The three in the first end] definitely got them chasing us a little bit and we played really well through the first five ends so they were chasing us throughout, but they made their shots to score so the game kept close.

“We just had to keep putting the pressure on them.”

The Hong Kong team then took this confidence into the second session, eventually recording a 6-4 win over Israel.

The lead kept changing hands between the two sides but

Hong Kong's 3-0 victory in the seventh end made sure they secured the win.

Elsewhere, defending champions Switzerland thrashed Luxembourg 10-1 in Group A, while hosts Sweden beat Scotland by an 8-6 scoreline in Group D after recovering miraculously from being 6-2 down in the sixth end.