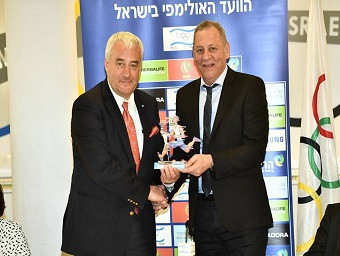 Ludwig Spaenle, founder of the Munich 1972 Massacre Memorial in Germany set up last September in memory of the victims of the 1972 Olympic Games, has been honoured by the Olympic Committee of Israel (OCI).

The Memorial is a memorial of the Munich Massacre, when the Palestinian terrorist group "Black September" took 11 Israeli Olympic team members hostage and killed them along with a German police officer.

"On behalf of all of us, I would like to thank very much Dr Spaenle for his outstanding efforts," Carmi said.

"We will always see him as a close friend."

Ilana Romano and Annecy Spitzer, respective widows of weightlifter Yossef Romano and fencing coach Andre Spitzer, thanked Spaenle on behalf of the bereaved families for his long-lasting commitment and outstanding work in helping establish the Memorial in Munich.

Judoka Yael Arad, the first Israeli athlete to win an Olympic medal when she took silver in the under-61 kilograms class at Barcelona 1992, and gymnastics world champion Artium Dolgopiat also featured to in tributes to Spaenle.

"I was on the Olympic site [at Munich 1972] when the President of the International Olympic Committee [Avery Brundage] said that the Games should go on regardless of the massacre," Spaenle recalled.

"I thank God that gave me the strength to take part in this project - it is our mission to remember and commemorate them, to cherish their memory."