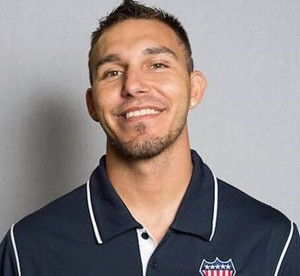 Robbie Gaupp of the United States has become the first Para skeleton athlete to complete a run from the top of the Olympic track in Lake Placid.

Gaupp made history during his final training run of the season as he began from start one.

Para bobsleigh and skeleton races usually train and compete from start three on the course in the American city, which staged the Winter Olympics in 1932 and 1980.

"I thought I could do it, I had been training consistently from start two for a couple of days,” Gaupp said.

The American athlete, who was injured while on duty in Texas in 2008 and is classed as an arm amputee despite surgery preventing amputation of his left arm, hopes to one day fulfill his dream of becoming a Paralympian.

Gaupp unsuccessfully tried out for the athletics squad for the 2016 Summer Paralympic Games in Rio de Janeiro.

His ambition has been further hindered by the International Paralympic Committee's decision not to include Para skeleton on the programme for Beijing 2022.

The IPC provisionally approved the inclusion of Para bobsleigh but skeleton failed to make the cut as the sport does not meet the governing body's requirements.

"I’ve made it to a worlds, but I would love to be a Paralympian in my lifetime," Gaupp added.

“Right now, this is great.

"As long as it’s here, I’m going to keep doing it.

"That’s what I’ve always done in all of my sports.”