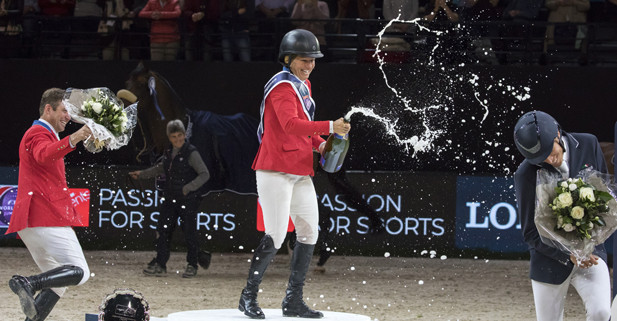 In a cliffhanger of a second round the 54-year-old American rider faulted for the first time over three tough days of jumping at the Accor Arena when last to go.

The crowd had to hold their breath until she crossed the line to a roar of approval, separated by just two penalty points from Madden’s 36-year-old compatriot Devin Ryan.

The biggest surprise package of the week, the relatively unknown Ryan, was relentlessly cool yet again as his grey gelding son of the great stallion Zirocco Blue continued to make the super-tough courses designed by Spain’s Santiago Varela look fairly elementary.

The hard-luck story of the final afternoon was that of Sweden’s 37-year-old Henrik von Eckermann, who had to settle for third place for the second year in a row.

In runner-up spot and carrying four faults as the afternoon began, he might have forced Madden into a jump-off but for a mistake with Tovek’s Mary Lou in the closing moments.

Madden, who previously claimed the title in 2013 said it was "double-exciting" to post her second win, and particularly with this 12-year-old stallion.

"We’ve really believed in him but he’s taken time to mature, so for him to come through today is fantastic," she said.

Her two nearest rivals kept all the pressure in place when making no mistake in today’s first round, von Eckermann carrying his four points forward and Ryan still sitting on a total of six.

A little rattle at the oxer at fence three on the 13-obstacle course, and another at vertical number seven set American hearts beating a bit faster, but Madden cleared the line with nothing to add, so the top end of the standings looked the same when the top 20 returned for round two over a new track.

Ryan, who hails from Long Valley in New Jersey, did it again, steering Eddie Blue home with apparent ease once more

There was tense silence after Madden’s stallion hit the middle element of the triple combination at fence six.

One more error would hand the title to fellow-American Ryan but the double Olympic champion held on.

"I love the World Cup Final - each year I make it a goal to get there, and to win, and I did it again," Madden, who finished on four faults, two less than Ryan and four less than von Eckermann, said.