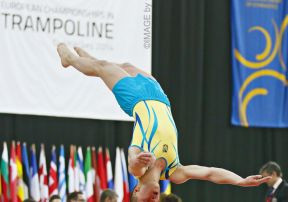 Belarus won a golden double in the men’s and women’s trampoline events at today’s European Championships in Trampoline, Double Mini-Trampoline and Tumbling in Baku.

Belarus were comfortable winners in the women’s final even after Maria Makharynskaya’s early exit at the National Gymnastics Arena.

The 2014 European champion Hanna Hancharova showed her teammates how to control their nerves, beating a French team competing with three gymnasts by more than two points.

In the men’s competition the teams from Russia and Belarus both excelled, delivering a thrilling final.

Eternal rivals Hancharou and Ushakov were the only gymnasts to score above 60 points, 61.530 and 60.495 respectively.

Their team-mates followed in their footsteps, not missing a single routine.

Before the Belarussian double, Great Britain’s junior tumbling squads were on top form.

Jaydon Paddock’s near stuck triple sealed the deal for the men, and the women soon rose to the challenge.

Russia took a double silver while France women and the Ukrainian men won the bronze.

They were joined on the podium by Portugal and Spain who exchanged spots: Spain’s men placed second and the Portuguese third.

The roles were reversed in the women’s competition