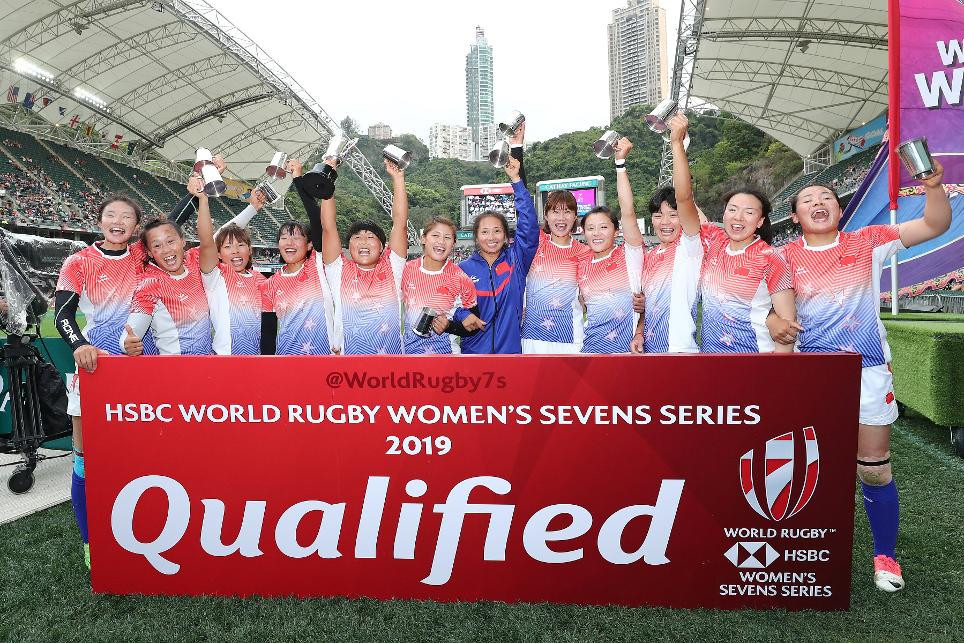 China's women have earned promotion to the World Rugby Women's Sevens Series 2019 after winning the qualifying tournament attached to the men's Hong Kong leg that got underway today.

In the accompanying men's qualifying tournament in the Hong Kong Stadium, Uruguay, Ireland, Uganda and Germany have each won both of their opening games, with Japan, Zimbabwe, Chile and Papua New Guinea each having won one and lost one.

China's women came from 7-0 down at half-time in their qualifying final before earning a 31-14 win over South Africa.

After six games over two days in this annual qualifying event, the side coached by Lu Zhuan had conceded just eight tries.

After Unathi Elis Mali’s try had given South Africa the initiative, China responded with a hat-trick from Keyi Chen, and further scores from Min Yang and Wan Yu Wang secured the victory.

“It feels so good," said Chen after the final whistle, with her country now given core status for next term.

"We are so happy as we worked so hard for this."

China will now feature as one of the 12 core teams on the World Series and will automatically qualify for each event.

However, before joining the Series they will contest the Rugby World Cup Sevens in San Francisco between July 20 and 22.

"Congratulations to China, they were definitely the most consistent team over the two days," said the South Africa coach Paul Delport.

"It is tough, because we really wanted this and we came up short at the same stage last year."

Elsewhere in the women's qualifier, Kenya finished third after losing out 12-7 in the semi-final against South Africa, while Belgium took fourth spot after a 22-5 loss to China.

In the main men's World Series competition, Fiji got their tournament started with a 31-12 win over Samoa, and New Zealand beat Russia 36-5.

Kenya earned a 33-10 win over Canada, during which Willy Ambaka scored his 100th try in the World Rugby Sevens Series, and Spain upset Australia 17-12.

There was a special resonance to Scotland’s opening 22-19 win, as it was over their ancient rivals England.

One match was drawn - the United States and France finished at 24-24.