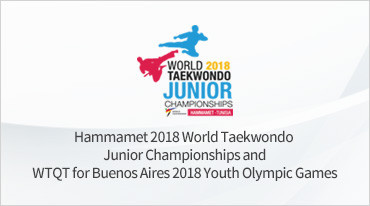 The World Taekwondo Qualification Tournament for the Buenos Aires 2018 Youth Olympic Games will take place tomorrow and Saturday (April 7), and will be followed by the World Taekwondo Junior Championships, which will run from April 9 to 13.

The Youth Olympic qualifying event has attracted an entry of 438 athletes from 111 countries.

It will feature five female and five male weight categories for teenagers aged 16 and 17 - meaning competitors have to be born between January 1, 2001 and December 31, 2002.

The top eight players in each category will qualify for Buenos Aires 2018 in October.

Following that, the World Junior Championships will feature 10 female and 10 male weight categories for teenagers aged 15 to 17.

The World Taekwondo Junior Championships were first held in Barcelona in 1996.

The 2018 tournament is the 12th edition and it will be first time Tunisia has hosted this event.

Both competitions will take place at the La Salle Couverte Hammamet.

As a precursor to these events, Hammamet staged a World Taekwondo Council Meeting yesterday while their General Assembly is today.