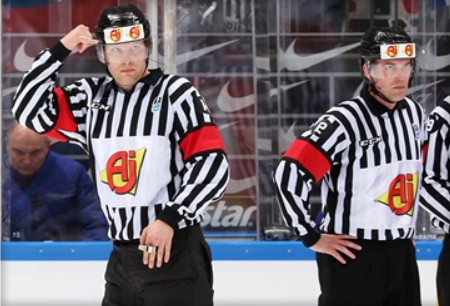 The International Ice Hockey Federation (IIHF) has named the 16 referees and 16 linesmen who will officiate at the 2018 Men's World Championships in Denmark.

The 32 on-ice officials were nominated by the IIHF Officiating Committee from a list of 64 candidates.

Twelve of the 16 nominated referees and eight of the linesmen also officiated at last month’s Pyeongchang 2018 Winter Olympic Games.

The list of on-ice officials is a mix of veterans and up-and-coming international officials who have a combined 74 World Championship participations between them.

Swiss referee Tobias Wehrli will officiate his ninth World Championships, while for Russia’s Konstantin Olenin it will be his eighth and for Czech Republic’s Antonin Jerabek, who called the 2017 gold medal game between Sweden and Canada, it will be his seventh.

The most experienced linesman is Finland’s Sakari Suominen, who will officiate his seventh World Championships.

He also helped oversee the 2017 gold medal game, which Sweden won, together with fellow linesman Alexander Otmakhov of Russia, who is on this year's list as well.

With referees Mark Lemelin of the United States and Aleksi Rantala of Finland, as well as Suominen, three men from the officiating crew that called the Pyeongchang 2018 men’s ice hockey final between Olympic Athletes from Russia and Germany will be at the World Championships.

Canada, Finland, Russia and the US are best represented with four officials each.

Jensen made his World Championships debut last year and will have the opportunity to participate on home ice this time round.

The 2018 World Championships are due to take place in Copenhagen and Herning from May 4 to 20.

Last month, the IIHF announced that 250,000 tickets had been sold for the event.

The world governing body believes the fact Denmark is staging the tournament for the first time has had a large impact on ticket sales.

Prior to being awarded the competition in May 2014, Denmark was the only top-ranked IIHF country to have never played host.