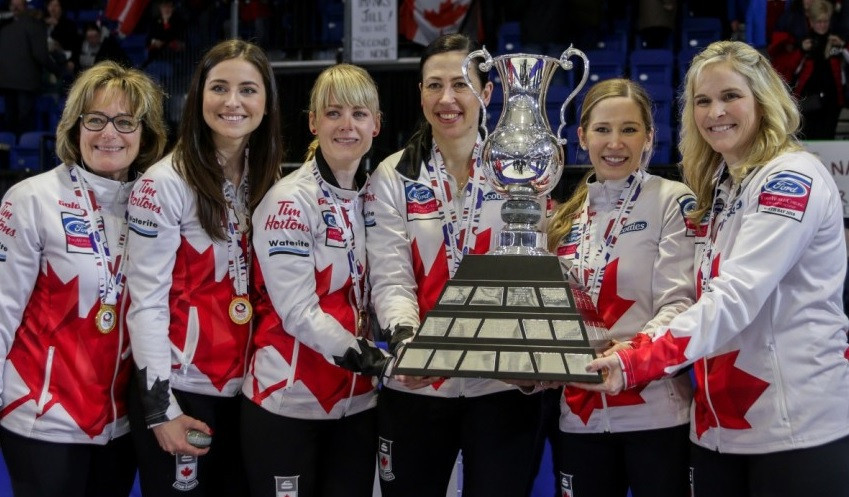 Canada, skipped by Jennifer Jones, claimed a 7-6 win following a hard-fought contest with their Swedish opponents at the North Bay Memorial Gardens.

The triumph ensured the women's crown remained in Canada after the squad led by Rachel Homan clinched the gold medal in Beijing last year.

It also went some way to banishing the demons of Canada's performance at last month's Olympic Games in Pyeongchang, where Homan and her team failed to qualify for the medal rounds.

Russia took bronze following a 6-5 win over the United States.

Jones scored two points to put her side ahead of the Swedish rink, led by Anna Hasselborg and which featured third Sara McManus, second player Agnes Knochenhauer and lead Sofia Mabergs.

Hasselborg then hit back with three in the fifth to move the recently-crowned Olympic champions 3-2 ahead.

Canada retook the lead with two points before Hasselborg responded by levelling the match at 4-4.

After a blanked eighth end, Jones added another two but Hasselborg was again equal to it, sending the encounter into an extra end with two in the 10th.

A mistake from Hasselborg in the extra end, where she completely missed a take-out attempt, left a Canadian stone in the house which saw the host nation seal the title.

"I can’t believe it and to do it in front of this amazing crowd is just unbelievable," Jones, who last won the world title in 2008, said.

"It was a great game and there were a lot of great shots by both teams and we put on a great show for all the fans and had a ton of fun – what a way to end the week.

"We knew they’d need to make a good one to tie and we knew we’d have the hammer in the extra which is what we always want.

"This is our last together as a team so it’s pretty special, and to do it in front of these great fans in Canada is something we’ll remember forever."