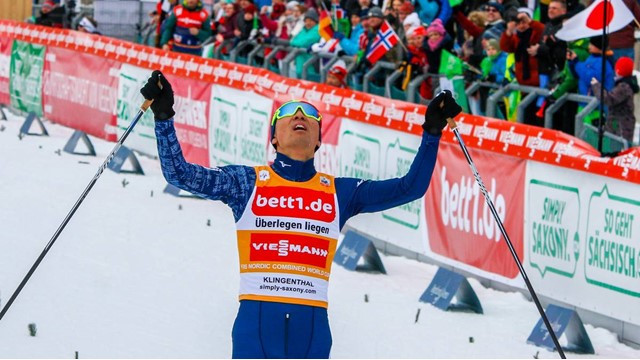 The Olympic silver medallist entered his name on the Schwarzwaldpokal winners list after a strong cross-country race in which he finished 6.3 seconds ahead of Norway’s Jarl Magnus Riiber.

Riiber won the jumping round with a distance of 103.5 metres, earning a total of 120.7 points that gave him a seven-second head start on Watabe's compatriot Go Yamamoto.

Austria’s Mario Seidl, with a jump of 97.5m, set off in third place, 40 seconds behind Riiber.

Fabian Rießle was the best German in the jumping, finishing 14th to ensure he was still in striking distance for a home victory with a delay of 1min 15sec.

Watabe, usually a strong jumper, ranked only 11th and had to contend with a delay of 1min 04sec, the same starting time as Gruber.

Home athlete Eric Frenzel had to say goodbye to his ambitions of winning a hat-trick of Schwarzwaldpokal victories.

He had a mediocre jump of 89m and started 1min 48sec behind the leader.

The track suited Watabe, with soft snow making it hard to ski fast, especially for the heavier athletes.

Watabe sped on in the first two laps and had caught the leaders Yamamoto and Riiber by the 6.2 kilometre point of the race, bringing Seidl and Gruber with him.

In the end, there was a clear margin for Watabe, Riiber and Gruber.