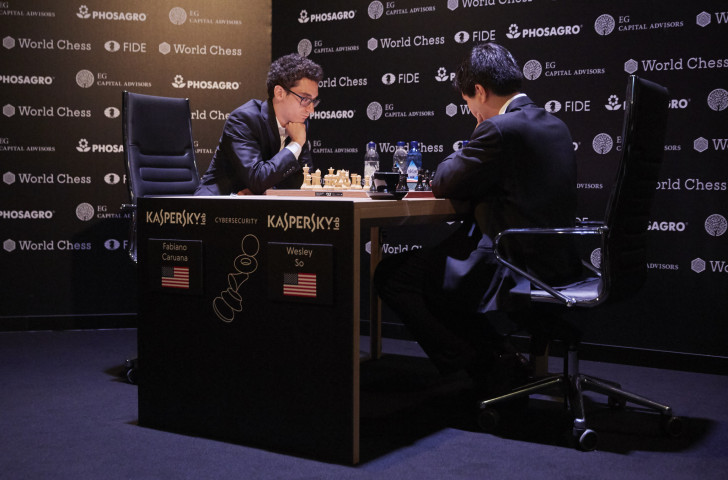 Another draw – this time against Vladimir Kramnik – kept Fabiano Caruana of the United States half a point in the lead in the World Chess Federation (FIDE) Candidates Tournament in Berlin with just three rounds to go.

The 25 year-old Italian/American’s result against the Russian who entered this event as the wild card means he is still in line to be the challenger to Norway’s Magnus Carlsen in the World Championship match that will take place in London from November 8 to 28.

But Caruana, who has seven points from his 11 matches so far, faces what could be a challenging match tomorrow against Sergey Karjakin, the 28-year-old Russian who lost to Carlsen in an excruciating tie-break series when the world title was last played for two years ago.

Karjakin lost twice in the first six games before earning his first win in round seven, since when he has won two more and drawn two, with today’s victory over Armenia’s Levon Aronian bringing him up to six points – half a point behind the man currently second of the eight contenders, Shakhriyar Mamedyarov.

The Azerbaijani, ranked world number two, drew with Wesley So of the US today to reach a total of six and a half points at the Kuelhaus venue.

Along with Caruana and Mamedyarov, China’s Ding Liren brought an unbeaten record into round 11, although the fact that he had not managed a single win left him mid-table.

Another draw put him fifth, with five and a half points, while his opponent Alexander Grischuk of Russia moved to third, equal on points with Karjakin.

Grischuk, who has become a model of consistency after losing his opening match to Kramnik, also has an opportunity for a dramatic advancement tomorrow as he plays Aronian, currently last of the eight contenders with three and a half points.

Sunday (March 25) is scheduled as a rest day before the final two rounds, with March 28 available should tie-breaks be necessary.

The event is being contested as a double round-robin with each player playing 14 games, seven with white pieces and seven with black.