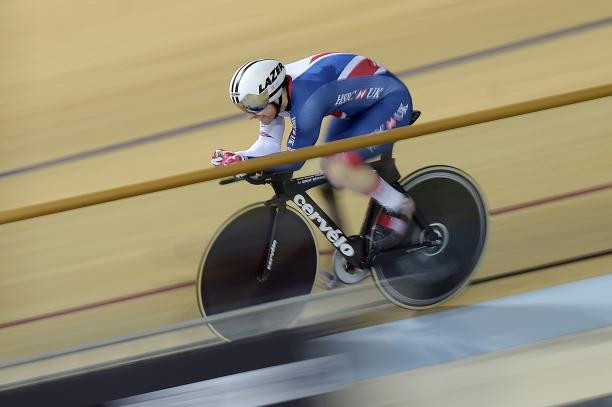 Great Britain carried on from their dominant Rio 2016 Paralympics performance by winning five medals on the opening day of the Para Cycling Track World Championships in the Brazilian city.

Her compatriot Jody Cundy followed up by winning the men's C4 one kilometre time trial to claim his 14th career world title.

The 39-year-old Briton has now gone unbeaten in world one kilometre events since 2006.

Jon-Allan Butterworth and Blaine Hunt added to the team's medal tally with respective silver and bronze in the men's C5 one kilometre time trial behind Spain's Alfonso Cabello Llamas, who clocked 1:04.748.

Megan Giglia was the fifth Briton to win a medal on the night, taking silver in the women's C3 individual pursuit in 4:21.413 behind Germany's Denise Schindler, who clocked 4:06.604.

Bronze went to Jamie Whitmore of the US, who recorded 4:16.114 to hold off Australia's Simone Kennedy.

"I have been really pleasantly surprised with the competition here," said Cundy, a double gold medallist at the Rio 2016 Games.

"So many volunteers and so helpful - it makes it feel like a proper major competition.

"To come here and ride as well as I did today feels very good.

"It's been a fantastic experience and it's just the first day."

The men's C1 individual pursuit went to Spain's Ricardo Ten Argiles, who clocked 3:52.222 in finishing ahead of Canada's Ross Wilson, who stopped the watches at 3:54.584 as bronze went to China's Li Ahangyu.

David Nicholas of Australia took gold in the men's C3 individual pursuit in 3:34.804, beating Diederick Schelfhout of Belgium, who finished in 3:38.934.

Joseph Berenyi of the US overcame Spain's Eduardo Santas Asensio for bronze, clocking 3:37.293.

Alyda Norbruis of The Netherlands won the women's C2 individual pursuit in 4:11.913 in front of China's Zeng Sini, who clocked 4:13.340, with bronze going to Colombia's Daniela Carolina Munevar Florez.

The women's C5 time trial went to Caroline Groot of The Netherlands in 36.575.

China's Zhou Jufang took silver in 38.324, with bronze going to Argentina's Mariela Delgado, who was timed at 38.689.

The competition is the first at which athletes can collect ranking points towards the Tokyo 2020 Paralympics.

It is also the first World Championship in any Olympic or Paralympic sport to use a Rio 2016 venue.