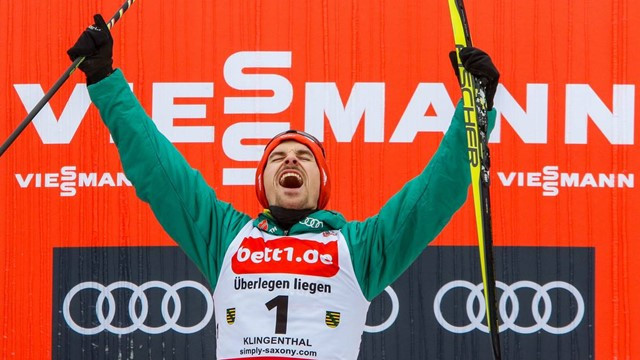 Germany’s Fabian Rießle made it three victories in a row with a second home triumph at Klingenthal in the International Ski Federation (FIS) Nordic Combined World Cup today.

Team-mate and Pyeongchang 2018 gold medallist Johannes Rydzek added to the home fans’ delight as he finished in second place, one second behind Rießle.

But the overall World Cup honours at this event went to Japan as Akito Watabe confirmed his position with his third place.

Watabe finished 5.5 seconds after Rießle, which means he leads the standings with 1,235 points and cannot be caught by his closest pursuer, Norway’s Jan Schmid, who has 1,033.

The weather had just about allowed jumping in yesterday’s provisional competition round (PCR) but changing and uncontrollable conditions made jumping impossible today in Klingenthal’s Vogtlandarena, so the PCR had to be used to establish the competition.

Watabe had earned pole position with a jump of 134 metres and 135.5 points but the battle for overall honours remained live given Schmid’s second place, just 18 seconds behind the Japanese athlete.

Starting with a 202 points deficit and with only 300 points to win still, Schmid urgently needed to gain ground on Watabe and also hold off Rießle, who trailed the Norwegian by just 143 points.

The task was not made easy by Rießle’s own good showing in the PCR jump of 127 metres, rankingd him third and saw him starting only 18 seconds after Schmid.

After his slight mishap and crash on the track yesterday, Rydzek was given a realistic chance of earning a better result with a jump of 127.5m that left him 46 seconds off the leader.

It was a chance that the Olympic champion took.

Watabe kept his lead until the last lap when the two leading Germans closed the gap on him.

They brought Schmid with them, having caught him at the four kilometre point, but the Norwegian dropped out of contention as they upped the pace to move ahead.

The 27-year-old Rießle is in unbeatable form right now and followed up his previous wins in Trondheim and on this same course as he edged ahead of his compatriot to finish in 23min 39.8sec.

Rydzek was a second back, and Watabe took third, 5.5 seconds back, with Schmid finishing fourth, 44.1 seconds back.