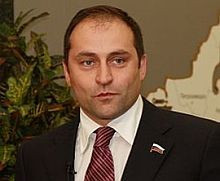 Russian Curling Federation President Dmitry Svishchev has claimed there are similarities between Aleksandr Krushelnitckii doping case and the country being blamed for the attempted murder of former spy Sergei Skripal and his daughter.

Svishchev, also chairman of the State Duma Committee on Physical Culture, Sport and Youth Affairs, alleged the two incidents were direct attacks on Russia prior to major sporting events.

He claimed that both cases had been blamed on Russia due to substances being developed in the Soviet Union but there was no solid proof behind either case.

Former double agent Skripal and daughter Yulia remain in a critical condition after they were poisoned with Novichok, a Soviet-era military-grade "nerve agent" in British city Salisbury earlier this month.

British Prime Minister Theresa May has held Russia culpable for the incident and claimed the country had provided "no credible explanation" for the attack.

May had given Russia a midnight deadline on Tuesday (March 13) to explain their alleged use of a chemical weapon, dismissed as an "ultimatum" by Moscow.

The Kremlin failed to provide a response.

Svishchev compared the incident to Krushelnitckii’s positive drug test for meldonium at Pyeongchang 2018 and claimed that the “script-writers and directors are the same, only the actors are different.”

It created huge controversy as Russia were already competing neutrally at the Games - as the Olympic Athletes from Russia (OAR) - due to manipulation of the drug testing scheme at Sochi 2014.

"They are targeted attacks on Russia that are well-rehearsed in the lead-up to global sporting competitions," he said, according to independent Russian news agency Interfax and reported on RT, an international television network funded by the Kremlin.

"Look at what happened in Pyeongchang with Krushelnitckii: after winning bronze at the Olympics, it came to light he took meldonium - a banned substance developed by Soviet means.

"Obviously, the goal of this provocation was the unwillingness of the organizers to see the Russian flag at the Closing Ceremony at the Games.

"There is no evidence, no proof, just unfounded accusation, ultimatums, threats to boycott the World Cup in Russia and declaring our country an aggressor."

Britain’s Prime Minister May confirmed there would not be a high-level British presence at the Russia 2018 FIFA World Cup in a statement to the House of Commons in London on Wednesday (March 14).

Prince William, the Duke of Cambridge, will not attend the World Cup despite his role as President of the English Football Association.

It was also claimed Prince Harry had no plans to visit Russia for the global showpiece scheduled to take place between June 14 and July 15.

At least one of the two had attended the previous three World Cups at Germany in 2006, South Africa 2010 and Brazil 2014.

The England squad is still due to participate at the tournament, scheduled to run from June 14 to July 15.

England manager Gareth Southgate played down suggestions the team would not participate at a press conference last week, where he named his squad for friendly matches building towards the tournament.

"Clearly, it’s a really serious matter and it’s developing very quickly but my job as England football manager is to concentrate on the football and prepare the team," he said.

"As far as all my briefings and information is, we’re preparing to go to the World Cup – there’s no doubt in our mind that’s what we should be doing.

"And the only thing at this stage that is of highest importance is the safety and security of our players and absolutely of our travelling supporters.

"It’s a matter that’s completely out of my control, really.

"We are desperate to go to a World Cup and that’s where my remit ends on that matter."