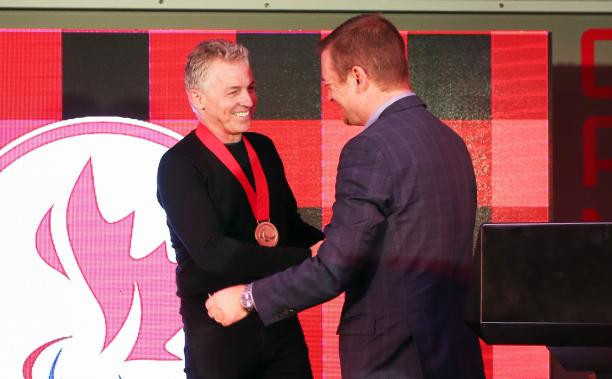 Canada Snowboard executive director Patrick Jarvis has been awarded the Paralympic Order, the highest honour a person connected with the Paralympic Movement can receive, during a ceremony held on the sidelines of Pyeongchang 2018 here.

He was presented with the honour by International Paralympic Committee (IPC) President Andrew Parsons at Casa Italia.

Jarvis competed in athletics at the Barcelona 1992 Paralympics before successfully transitioning to sports administration.

He was part of the Canadian team mission staff at the Atlanta 1996 Paralympics and was the Chef de Mission at the Nagano Winter Games two years later.

In 1998, Jarvis was elected President of the Canadian Paralympic Committee (CPC) serving two terms until 2006.

Between 2002 and 2003, he was on the Board of Directors of the successful Vancouver 2010 Bid Corporation and eventually becoming a Board Director of the Organising Committee that delivered the Games.

In 2005, Jarvis was elected to the IPC Governing Board and served three terms, being involved and leading several working groups.

Here in Pyeongchang, he is serving a dual purpose as Canada Snowboard executive director and, as a Proud Paralympian and Calgarian, he is focused on a potential bid for the 2026 Olympic and Paralympic Games by his home city.

"Under his leadership he transformed the CPC from a Games to a Movement based organisation," Parsons said.

"It is no coincidence that while he was in charge, the CPC enjoyed some of their best finishes at a Paralympic Games."

The Brazilian added: "As an IPC Governing Board member, he provided valuable and balanced input from an athlete’s perspective.

"Over 12 years, he was a hugely popular member.

"He possessed a remarkable talent during meetings to conclude very long debates by providing a motion that brought all the different views together.

"When he spoke, you knew you were going to hear great words of wisdom and something of note.

"He was always a very active and always very vocal, especially when it came to matters of good governance and ethics.

"Away from his work responsibilities, Patrick is a wonderful person to be around.

"Armed with a great sense of humour, he is always full of passion and positive energy.

"He is an asset to any organisation."

Jarvis was one of three fellow candidates Parsons beat to become just the third-ever head of the IPC in September of last year.

Parsons required just one round of voting at the IPC General Assembly in Abu Dhabi, securing 84 votes to comfortably defeat China's Zhang Haidi, who finished second with 47 votes, as well as Denmark's John Petersson, third with 19, and Jarvis, fourth with 12.

Among the previous recipients of the Paralympic Order are Jacques Rogge and Sir Philip Craven, former Presidents of the IOC and IPC respectively.

Others include Britain’s two-time Olympic 1,500 metres champion Sebastian Coe, who is now the President of the International Association of Athletics Federations, and Whang Youn Dai, a leading advocate for persons with disabilities for more than 50 years.