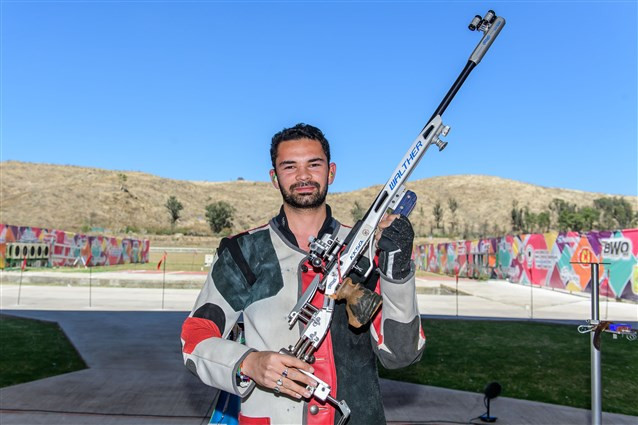 Competing in his first-ever World Cup event, the 22-year-old posted a winning total of 455.6 points at the Mexican city’s Club Cinegetico Jalisciense.

Sheoran, in fourth place after the kneeling position and second at the end of prone, fired two 10.8s during the elimination phase on his way to sealing victory in the fifth and last rifle event of the competition.

He joins Shahzar Rizvi, Manu Bhaker and Om Prakash Mitharval in winning a gold medal for India in Guadalajara.

Austria’s Bernhard Pickl took the silver medal with 452.0 points, bettering the eighth-place finish he managed in Fort Benning in 2014, his only previous World Cup start.

Péni was the gold medallist in the men’s 10m air rifle event on Sunday (March 4).

The final event of the pistol discipline in Guadalajara saw Olympic champion Anna Korakaki of Greece top an ISSF World Cup podium for the first time in her career in the women's 25m.

Despite struggling in her final series, where she only scored one hit, Korakaki successfully defended first position and pocketed the brightest medal with 29 hits.

Germany’s Doreen Vonnekamp, who also closed her match with a disappointing one-hit series, took the silver medal with 27.

The third place was taken by France’s Mathilde Lamolle with 24 hits.

The 20-year-old, crowned junior world champion in Granada in 2014, secured the first World Cup medal of her fledging career.

In the penultimate event of this season’s first ISSF World Cup stage, legendary shooter Kimberly Rhode of the United States won the 11th women’s skeet gold medal of her career.

After missing two targets in her first station, the 38-year-old sealed the match with an impressive streak of 30 consecutive hits, eventually equalling her own world record of 56.

It’s the second medal double for the US in Guadalajara, after the one secured by Ashley Carroll and Aeriel Alease Skinner in the women’s trap final.

Rounding out the podium was Great Britain’s Amber Hill, who pocketed another World Cup medal after the gold she won at the ISSF World Cup in Mexican city Acapulco in 2013.

Hill finished with 42 target hits out of 50.

Action in Guadalajara is due to conclude tomorrow with the men’s skeet final.