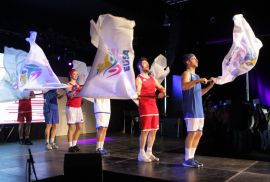 A promotional event has taken place in Belgrade to raise attention surrounding the 2020 European Universities Games in the Serbian capital.

Serbian Minister of Youth and Sport Vanja Udovičić was among those present to predict a multitude of medals for the Balkan nation.

A rich musical programme featured at the event at the Dom Omladine Beograda - the "Home of Youth" in the city - alongside young athletes representing many different sports.

It is expected that more than 6,000 athletes will participate at the student event representing more than 40 countries and 500 universities.

They were joined by guests from Macedonia, Italy, Belarus and Cyprus.

"After organising several major competitions in the past years, this European Universities Games should be the crown of our sport, because the base lies at the University" said Udovičić.

It will follow an event this year in Coimbra in Portugal from July 15 to 20.