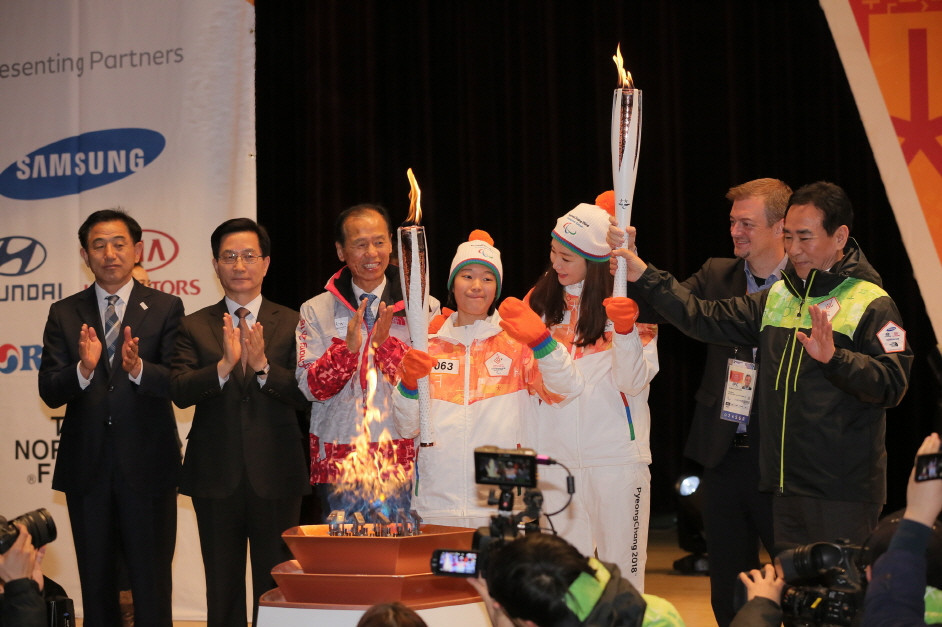 The Pyeongchang 2018 Paralympic Torch Relay has been made its penultimate stop in Gangneung en route to the Opening Ceremony.

The flame arrived at Gangneung City Hall today with hundreds of people attending to watch its second-to-last handover before tomorrow's Ceremony.

Before the handover, guests were treated to a samulnori, a traditional Korean percussion quartet, performance.

This was followed by a speech from International Paralympic Committee (IPC) President Andrew Parsons, who will oversee his first Games in the role during the next 10 days.

"Over the last seven days the excitement for these Games has intensified as a result of the Paralympic Torch Relay Flame lighting events in five different parts of Korea, as well as Stoke Mandeville, the birthplace of the Paralympic Movement," the Brazilian said.

"Tonight, the excitement builds further as we begin the final leg of the Torch relay.

"By the time the Paralympic flame reaches tomorrow’s Opening Ceremony, 800 Torchbearers running in pairs will have taken part.

"I was one of them this afternoon."

Parsons' involvement in the Relay had seen him pass the Torch to the first President of the IPC, Robert Steadward, who served from 1989 to 2001.

Following Parsons' speech, South Korean actress Choi Ji-woo and young Para-track and field athlete Kim Kyung-min entered the room in Gangneung City Hall with the Torch and proceeded to light the penultimate cauldron of the Relay, signifying the handover.

Choi, a campaigner for visually impaired people, admitted she was humbled to be carrying the flame.

"I am honoured to be here as one of the last Torchbearers," she said.

The actress also added that she was especially looking forward to watching the wheelchair curling events, due to be held at the Gangneung Curling Centre.

Today's handover event ended with further words from Parsons, who said: "I look forward to seeing you tomorrow as we open the biggest Paralympic Winter Games in Pyeongchang.

"And as the song says, 'Let everyone shine'."

By the time the flame reaches tomorrow's Opening Ceremony at the Pyeongchang Olympic Stadium, it will have travelled 2,018 kilometres and "covered all corners of the country".

It started its journey around South Korea in the capital Seoul on March 2.

The flame then travelled to Chuncheon, Wonju and Jeongseon.