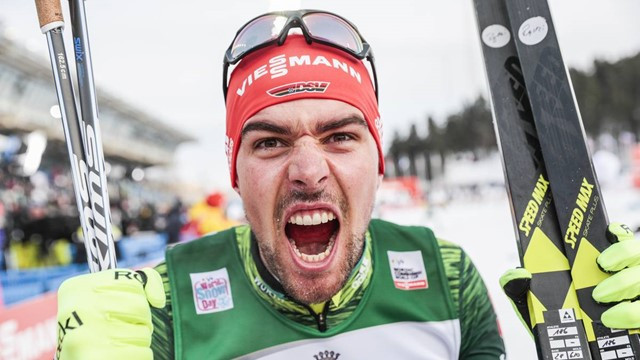 The German won the men's Gunderson individual event today in the Finnish resort after finishing the cross country leg in 24min 51.60sec.

Norway's Jørgen Graabak sprinted to third place in a frenetic charge for the line, a further 0.5 seconds back.

Japan's Akito Watabe had returned from his rest day yesterday to lead after the jumping element following a huge leap of 130.5 metres.

He was unable to maintain this lead, however, and eventually crossed the line fifth in 24:58.90.

Rydzek had placed seventh after the ski jumping but soon caught up with the leading group in the cross-country before breaking away late on.

"I was just trying to enjoy the competition, I'm pretty much knocked out now, but mega-happy," he said.

"I came here with a smile."

Germany's double Olympic champion Eric Frenzel could only finish 15th today after a poor ski jump left him 22nd at the halfway point.