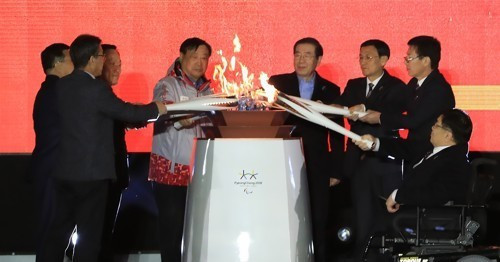 Pyeongchang 2018 held a Torch Lighting Ceremony at 7pm in the Olympic Park in Seoul.

Eight flames were unified into a single flame at a cauldron.

The flames represented the five regions of host country South Korea and Stoke Mandeville, the cradle of the Paralympic Movement.

There was also a flame representing the 1988 Paralympic Games in Seoul and another consisting of congratulatory messages from supporters across the world.

The Ceremony was attended by over 1,000 people, including Lee Hee-beom, President of Pyeongchang 2018, and Do Jong-hwan, South Korea's Minister of Culture, Sports and Tourism, and Seoul Mayor Park Won-soon.

"The Ceremony has significance in that it is held at the historical site where the flame of the 1988 Seoul Olympics was set ablaze," Lee told those attending the event.

A new Torch was then lit by Do and carried by figure skating athlete Choi Da-bin, who finished seventh in the ladies singles at the Olympics in Pyeongchang.

She passed the Torch to another skater, Kim Yuna, the 2010 Olympic gold medallist, to mark the official start of the Relay.

The Torch Relay is due to begin its journey to Pyeongchang early tomorrow.

A total of 148 runners are due participate along the 67.9 kilometre course before the Torch arrives in the host city in time for the Opening Ceremony on Friday (March 9).