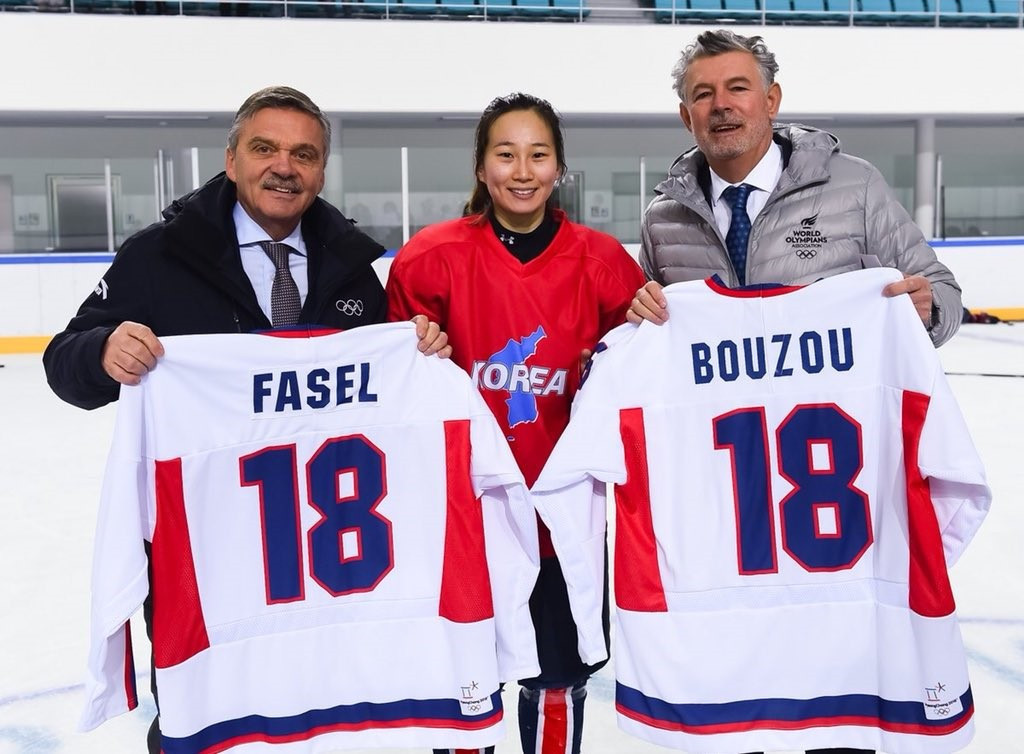 Members of the joint Korean women's ice hockey team that competed here at the Pyeongchang 2018 Winter Olympic Games have been brought together for a symbolic photo as part of Peace and Sport's #WhiteCard campaign.

The team's players were asked to pose for the photo at the Kwandong Hockey Centre by Peace and Sport President Joël Bouzou and International Ice Hockey Federation (IIHF) counterpart René Fasel.

Last year, Peace and Sport, in cooperation with the IIHF and the Pyeongchang 2018 Organising Committee, unified players from North and South Korea for a #WhiteCard photo during the Ice Hockey Women’s World Championship Division II Group A event in Gangneung.

Athletes here posed on the ice, holding up a #WhiteCard, the symbol of the sport for development and peace movement.

"Sport gives hope where politics fails," Bouzou, who is also the founder of Peace and Sport and President of the World Olympians Association, said here in Pyeongchang.

"This photo is a magnificent example of the power of sport diplomacy.

"It is also the result of what can be achieved when combining the permanent efforts of International Federations, Peace and Sport and the biggest sport event on the planet, the Olympic Games, led by the IOC [International Olympic Committee].

"Thanks to visionary leaders such as IIHF President René Fasel this picture is today a reality.

"The ice hockey #WhiteCard picture is a considerable achievement for Peace and Sport following the latest developments in the international relations between North and South Korea."

Fasel added: "After the Pyeongchang 2018 bid had won, we started to think how ice hockey could contribute to their idea of including North Koreans.

"[During the 2014 Olympic Winter Games] in Sochi, we contacted both the South and North Koreans about a unified women's hockey team.

"At that time the Democratic People's Republic of Korea team was actually stronger than the South Korean team.

"We thought why not a unified Korean team considering the signal it would send."

Yesterday, Fasel claimed to be hopeful that a unified team consisting of players from North and South Korea will appear again at the 2022 Winter Olympic Games in Beijing.

Any form of a North, South or unified Korean team will not qualify automatically in four years' time, but he is keen to consider a repeat.

A total of 12 players from North Korea participated alongside 23 from the South in an enlarged squad at Pyeongchang 2018.

Twenty-two of the 35 players featured in each game, with at least three of these having to be North Korean.

They competed under the name "Korea", with the unification flag displayed.

The team lost 8-0 in their opening two matches against Switzerland and Sweden before scoring their first goal in a 4-1 reverse to Japan.

They then lost 2-0 to Switzerland in a fifth-to-eighth-place classification game, prior to suffering a 6-1 defeat to Sweden in today’s seventh-place play-off.

Peace and Sport is an international, neutral and independent organisation based in Monaco.

It claims to promote peace using the power of sport.

Peace and Sport’s long-term goal of leveraging sport's influence for social unity is said to have gathered increased momentum year after year, with strong support from athletes and international sports federations.