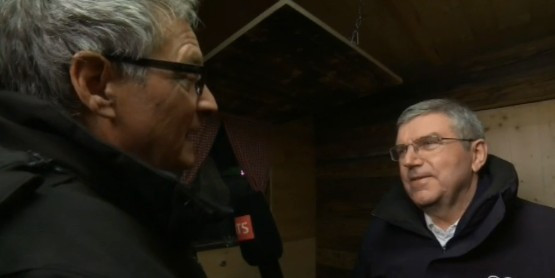 International Olympic Committee (IOC) President Thomas Bach claims he remains optimistic the Swiss public will back a referendum to bid for the 2026 Olympic and Paralympic Games in Sion even though a new survey shows only 36 per cent support it.

Patrick Baumann, one of four Swiss IOC members, also revealed he is hopeful that, despite high-levels of opposition, Sion will win the support of the public.

In an opinion poll published in the Le Matin Dimanche and SonntagsZeitung newspapers on Sunday (February 11), 43 per cent of people said they were against the Sion 2026 bid and 16 per cent said were "quite against" the idea.

There were five per cent who said they had no opinion.

The Swiss Olympic Committee and Swiss Government have backed a joint proposal by Sion, the capital of canton Valais, to bid for the 2026 Games and to share it with neighbouring cantons Vaud, Bern and Fribourg.

The proposal is to use existing venues but the Swiss Government have still pledged to contribute CHF 1 billion (£720 million/$1 billion/€810 million), if it is chosen.

A referendum is due to to be held in Kandersteg on June 8 and Valais on June 10 to decide whether the bid continues.

"It's necessary to convince the Swiss that the Olympic Games can help a region, renew it, and allow it to welcome the best winter sport athletes in the world.

"It's up to the Swiss to decide.

"I hope that the reforms made to the 2020 Olympic Agenda show people that we want a feasible, sustainable event that makes use of existing or temporary infrastructures, and there Switzerland has a lot to offer."

Switzerland has not hosted the Winter Olympics since St Moritz in 1948.

The biggest opposition to Sion's latest bid comes from the over-65 age group, where 55 per cent totally oppose the project and 17 per cent are "quite against it".

A total of 42 per cent were against the general idea of holding Olympic Games in Switzerland, while 18 per cent were "quite against".

Around 21 per cent thought it was a good idea, while 16 per cent were "quite in favour".

If Sion does bid, it is likely to face opposition from Sapporo in Japan and Calgary in Canada.

Stockholm in Sweden and Graz and Schladming in Austria are also deciding whether to bid.

"You can never guarantee how this [referendum] will go but, first of all, it's a region that breathes sport and knows what it does well for its infrastructures and different skiing resorts.

"That is something they understand well and they have their own minds.

"The state authorities have taken this in their heart and are campaigning very hard at the local level to show to the population that this is a good project for them.

"Then again in two months something funny may happen that nobody expects...but I hope they say yes and I am pretty confident."