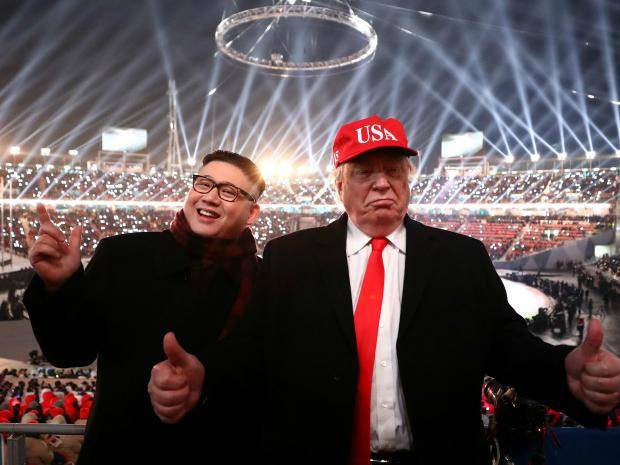 The GLM’s Brand Affiliation Index (BAI) is claimed to track the "closeness" of the relationship between branded entities, in this case Pyeongchang 2018 and The Olympic Partner (TOP) sponsors.

In what is considered a surprising turn, Trump ranks behind only IBM in a hefty list of ambushers on the Olympics brand scoreboard, which is led overall by GE and McDonald's.

Strained rhetoric between Kim and Trump led to security fears surrounding Pyeongchang 2018, which begun with the Opening Ceremony on Friday (February 9).

Kim's New Year's Day announcement, however, that his country wanted to compete at the Games led to a thawing in relations.

Following a meeting in Lausanne between both countries, the International Olympic Committee (IOC) and Pyeongchang 2018, it was announced that 22 North Koreans will compete.

The Alibaba Group, which became a top-tier sponsor of the IOC until 2028 in January last year, is the first Chinese organisation to appear on any of the GLM’s rankings.

Samsung and McDonald’s, which ended its worldwide partnership with immediate effect last June, are listed twice because they both occupy two spots on the charts.

"GLM is the first research institute to document the 'value leaks' that Olympic sponsors experience at the hands of 'non-affiliated marketers' (NAMs) that happen by chance, circumstance or, ever more likely, cleverly orchestrated stealth campaigns that include the newest social media tricks, tactics, and strategy," Paul JJ Payack, President and chief word analyst of the GLM, said

GLM has been measuring the depth of the link between Olympic TOP sponsors and their NAMs for the five Olympic Games since Beijing 2008.

It is claimed that doing so has "allowed a deeper understanding of the dynamics, strategies, and tactics employed by global brands as they intersect with the world of sports".

Among trends it has identified in the earliest stages of Pyeongchang 2018 is that the "world is caught up in the drama not only between the athletes and nations but also the battle among the brands that are paying literally billions for the privilege".

Other points of interest include Atos Origin finding themselves at the bottom of the rankings in 39th.

GML claims this is not of concern for the French system integrator as it is the "strategic position they long to occupy", owing to a "one-on-one selling model that works just fine".

Pyeongchang 2018 has been tracked by GLM for the past two years.

Thus far, the TOP Worldwide Sponsors show a small, but comfortable lead over the official partners with the ambushers trailing both by a significant margin.