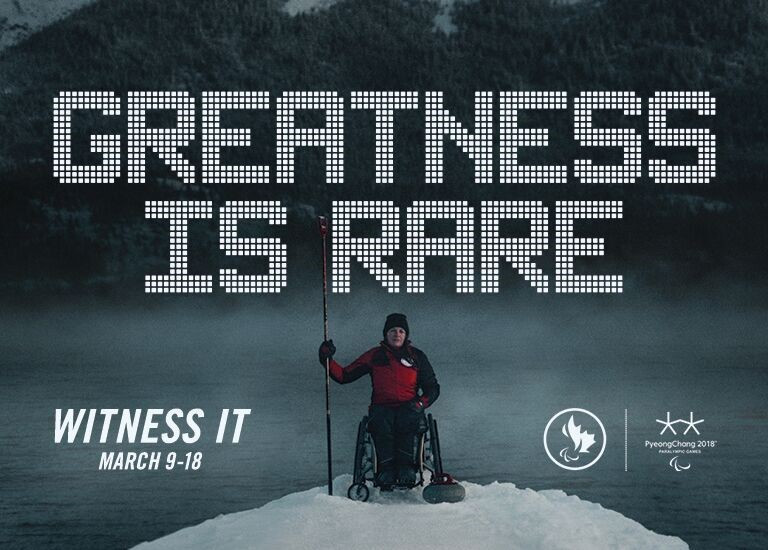 A campaign titled "Greatness is Rare: Witness it" has been launched by the Canadian Paralympic Committee (CPC) as the countdown continues to Pyeongchang 2018.

Developed in partnership with advertising agency BBDO Canada, the campaign is aimed at building awareness and support for Canada's athletes heading to next month's Winter Paralympics.

A series of adverts aim to highlight how small a percentage of the Canadian population qualifies to compete at the Paralympics Games or reach the pinnacle of their sport by winning a medal at the event.

"Few people know what it feels like to compete on the world stage in sport or win medals for Canada, which makes our athletes truly rare.

"Alongside our longstanding partner BBDO Canada, we are seeking to show Canadians they won't want to miss our great Paralympians compete.

"We want every Canadian to know they will be able to witness every minute of the Paralympic Games with unprecedented coverage through our media consortium from traditional broadcast to live coverage on social platforms."

The adverts will be used both digitally and on broadcasts.

The first advert features two-time Paralympic gold medallist Ina Forrest, due to be a member of Canada’s wheelchair curling team at Pyeongchang 2018.

A further two adverts are set to be released in the coming days featuring Alpine skiing and ice hockey.

The CPC revealed a second phase of the campaign will start in March, directly ahead of the Games, due to begin on March 9 and last until March 18.

It is claimed this will make it easier for Canadians to connect with the athletes as they prepare to compete for medals.

Canad have finished third in the overall medals table at the last two Winter Paralympic Games.

At Sochi four years ago they won 16 medals with seven of them gold.

"It is truly an amazing accomplishment to compete at the Paralympic Games and represent your country," Todd Nicholson, Team Canada's Chef de Mission for Pyeongchang 2018, said.

"This campaign truly captures the spirit of our athletes.

"These are superb athletes who have worked so hard to compete at the highest level for sport and who are proud to wear the maple leaf.

“Greatness is rare, and we hope all Canadians witness it for themselves with the Games this March."