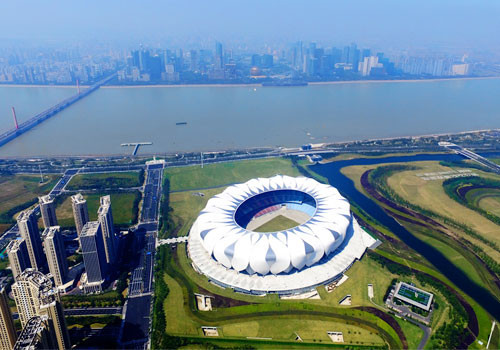 The official website and emblem design competition for the Hangzhou 2022 Asian Games have been launched during a ceremony in the host city.

During the ceremony, the lettering of www.hangzhou2022.cn was ignited, signifying the launch of the Hangzhou 2022 Organising Committee's (HAGOC) official website.

Using the site as the main platform, HAGOC then launched its global call for emblem design proposals.

Qi Xiaohu, HAGOC's deputy secretary general, was among those who pressed their palms on a big screen, resulting in the outdoor screens at the city’s landmark sites simultaneously displaying the domain of the official website as well as a video entitled "Invitation from the West Lake: HAGOC’s global call for emblem design proposals for the 19th Asian Games Hangzhou 2022".

Olympic swimming champion Luo Xuejuan, an ambassador for Hangzhou's bid for the Games, also took part along with Kong Shengdong, described as a national ethical role model, and Wang Yang, an amateur athlete representing the public.

The event’s emblem is considered an important visual element of Hangzhou 2022, serving as the major carrier to showcase the host city’s visions of the Asian Games and Chinese culture.

HAGOC claims the emblem should reflect not only the Olympic spirit, but also the culture and values of China and Hangzhou.

"The proposals should be inspiring, motivational, visually attractive, suitable for TV broadcast and applications in new technology," a statement reads.

Technical and legal documents on design and submission can be downloaded from the official website.

Proposals can be submitted from March 21 to 31.

HAGOC will set up a judging panel to evaluate all the proposals.

Hangzhou was chosen by acclamation to host the event at the 2015 Olympic Council of Asia General Assembly, held in Turkmenistan’s capital Ashgabat.

The city will become the first Chinese host of the continent's showpiece event since Guangzhou in 2010, and the third overall following Beijing in 1990.

It has agreed with the principle of launching a "green, smart, economical and civilised" Games, based on the foundations set by Incheon 2014.

Jakarta and Palembang in Indonesia are scheduled to host the next edition of the Asian Games, this year.