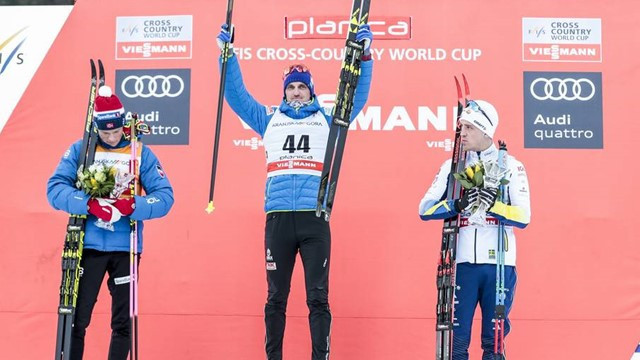 Victory at the International Ski Federation Cross-Country World Cup in Planica today enabled Kazakhstan’s Alexey Poltoranin to tie with the legendary Gunde Swan of Sweden for the most wins - seven - in the 15 kilometres Classic event.

Poltoranin earned his second World Cup win of the season at the Slovenian course, following his victory in Val di Fiemme earlier this month, by holding off the challenge of Norway's Johannes Høsflot Klæbo and finishing in 36min 54.7sec.

"I am happy to win," said Poltoranin.

"This is a very good course for me."

The Norwegian, winner of the sprint event yesterday, finished 13.2 seconds behind Poltoranin and has strengthened his position as leader of the overall World Cup standings.

Sweden's Calle Halfvarsson finished third, his first World Cup podium place of the season, at  42.8 seconds off the winner.

Klæbo now has 1012 points, with Russians Alexander Bolshunov on 710 and Alexey Chervotkin on 467.

After making the lower steps of the podium six times in 10 km classic competitions, Finland's Krista Parmakoski finally got her win.

She trailed Sweden's Charlotte Kalla by a second at 6.9 km and by 0.9 seconds at 8.9 km but finished strongly to cross the line with a 3.6 seconds margin of victory.

"We had a training camp here in the summer and when I saw the competition tracks here I said to my coach that I will have a good race in Planica this winter," Parmakoski said.

"It has happened and it feels great to finally have my first win.

"I wanted to get faster as the race went and when I saw that I was battling with Charlotte I really pushed hard over the final kilometre."

Weng has 1,254 points, followed by Ingvild Flugstad Østberg of Norway on 1087 and Jessica Diggins of the United States on 852.