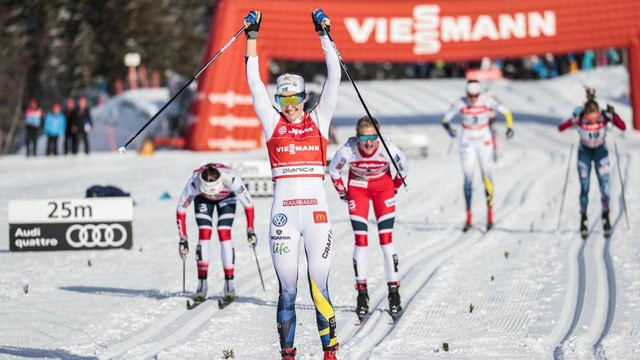 Both athletes dominated their classic sprint finals on a course that featured long gradual climbs that brought strong, classic technique skiers to the front.

It was also a great day for their respective nations as Norway and Sweden filled all six podium places.

She overtook her teammate Maiken Caspersen Falla in the final metres to claim silver.

Falla crossed in third place, 1.81 seconds behind Nilsson, while Harsem was 1.27 behind.

"I was feeling good the whole day," Nilsson said.

"I knew in the prologue it would be a good day.

"In the final curve I took my chances - it was a perfect day for me."

On the men's side it was Klæbo again who was the class of the field, having arrived as the day's fastest qualifier.

With his win today Klæbo took back the overall World Cup leader’s bib from Martin Johnsrud Sundby and now leads by 57 points.

In second place on the day was Norway's Emil Iverson.

Sweden's Teodor Peterson was third, 8.14 seconds behind the winner, for what was his first individual podium finish of the season.

"I had a lot of fun out there today,"said Klæbo

"It was great to see so many people along the course and in the stadium."