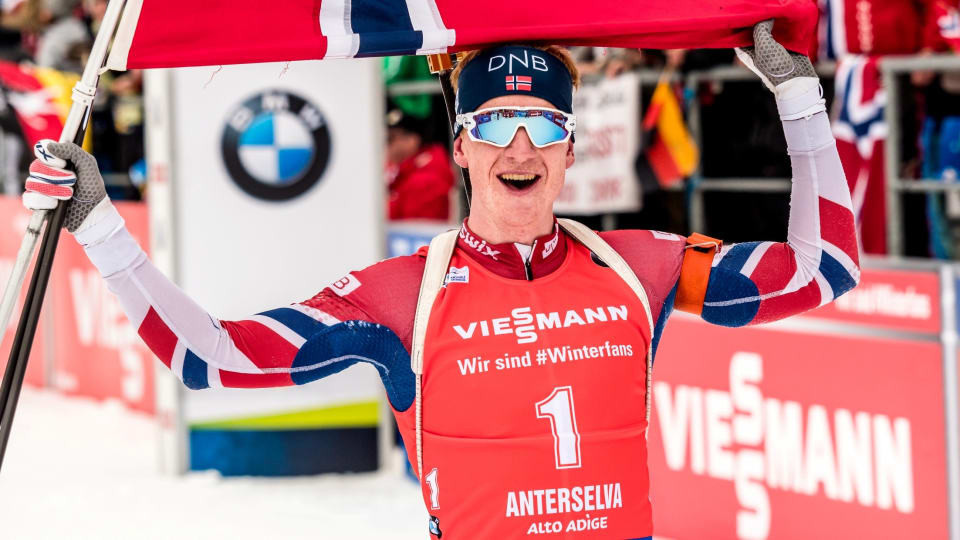 Johannes Thingnes Bø had what he described as "a perfect race" to add the men’s pursuit title in the International Biathlon Union World Cup event at Antholz to the 10 kilometres sprint title he had earned yesterday.

With conditions ideal in the northern Italy venue, the Norwegian shot clean and was unchallenged in a wire-to-wire win, his eighth of the season.

His time of 31min 14.4sec leaving him just over a minute clear of Marin Fourcade of France, who had been runner-up also in the previous day’s event.

Third place Anton Shipulin of Russia, like Fourcade with one penalty, was 1:18.4 back at the finish.

"I could not have done much better today," said Bø.

"It is not often you get a perfect race, but today was one of them…It was very nice to feel the energy from the people."

Germany’s Laura Dalmeier led the way in the women’s 10km pursuit competition s she finished in a time of 29:45.00.

Dorothea Wierer of Italy generated a lot of noise in the home stadium as she took second place, 17.3 seconds behind the German, with third place going to Darya Domracheva.

The Belarus competitor was strongly contending for second place until one of the last turns before the finish when she appeared to hit Wierer’s pole and then sportingly eased off to finish just under three seconds behind the Italiian.

The top three were in a league of their own, however, as the fourth-placed finisher, Tiril Eckhoff of Norway, was nearly 70 seconds adrift of Dalmeier.

Eckhoff had led Domracheva and Dalmeier into the stadium, with Wierer trailing by more than 20 seconds, but a dramatic finale changed everything.

The top three took their final shots together, but while Dalmeier cleaned, Domracheva had a penalty, and Eckhoff had two.

Wierer made up ground by cleaning before setting off in pursuit of the Belarus athlete.