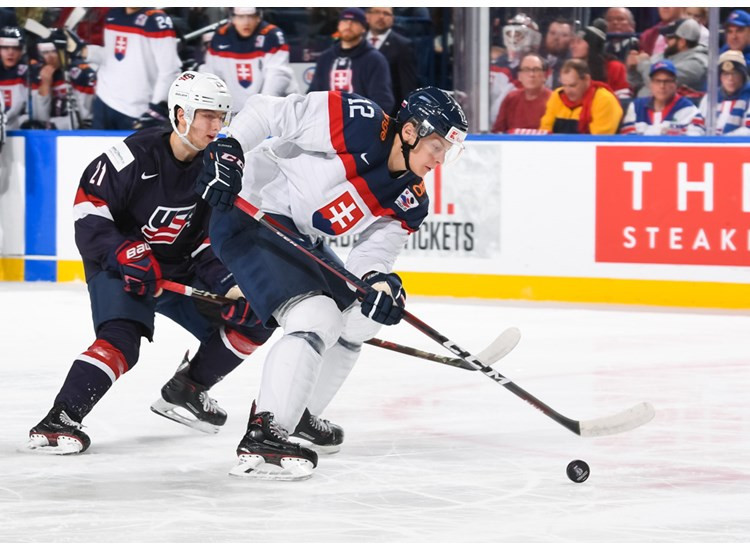 Bucek scored the winning goal with just over two minutes remaining in the third period of the Group A contest at the KeyBank Center.

He also assisted on the other two Slovakian goals, both of which were scored by Filip Krivošík.

The US’s goals came from Brady Tkachuk and Casey Mittelstadt with both being equalisers.

Victory for Slovakia was their first over the US at the IIHF World Junior Championships since the 2009 quarter-finals and ends a run of six consecutive losses.

Goaltender Roman Durny was the hero for the winners, stopping 43 of 45 shots.

Both Slovakia and the US are now level on three points in Group A along with Finland.

Today’s other match in Group A saw Finland defeat Denmark 4-1 at the KeyBank Center.

Joona Koppanen and Aapeli Rasanen both scored to give Finland a 2-0 lead and although Nikolaj Krag pulled one back for Denmark, further goals from Juuso Valimaki and Henri Jokiharju wrapped up the win.

In Group B, Sweden made it two wins out of two with a 3-1 victory over Czech Republic at the KeyBank Center.

Filip Zadina was on target for the Czechs to make the score 2-1.

Russia are second in Group B on goal difference having overcome Switzerland 5-2 at Buffalo's HarborCenter.

Goals from Artur Kayumov, Georgi Ivanov and Vitali Abramov settled the contest after Switzerland had twice come from behind to draw level.

Marco Miranda and Ken Jager cancelled them out.

The top four sides in each group will progress to the quarter-finals with competition continuing tomorrow.

Among tomorrow's fixtures is the first outdoor match to be held at an IIHF World Junior Championships.

The game will be between the US and Canada at the Ralph Wilson Stadium in Erie County.